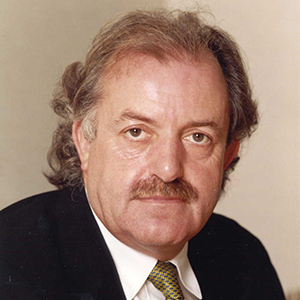 Ted Ettershank served as managing director of Lloyds TSB Commercial Finance Limited for 20 years.  Over the years, he built up from small beginnings to a great team of people at all levels, eventually employing over 1,000 people.

The team was constructed on a platform of being market-leading with a high level of customer satisfaction and excellent profitable returns.

Ettershank was also a managing director for Bank of Ireland Commercial Finance Limited in Dublin from 1976 to 1987.  He was responsible for opening the related businesses for the company in Belfast and London.

Ettershank is a great believer in working in partnership with industry associations, becoming one of the founding members and the first president of the then-Commercial Finance of Europe in the early nineties.  He was also chairman for the ABFA (UK) twice and Global International Factors Group (now merged with FCI) in which he received a Lifetime Achievement Award from both associations. Ettershank retired in 2008 and still occasionally acts as a board advisor.

How did you get your start in the industry? What are some of the most memorable moments of your career?
As managing director of TSB Commercial Finance Ltd. and following the merger with Lloyds in 2000, I was told that I would be taking over the running of their invoice finance business which included the sizeable Alex Lawrie Factors Ltd.  The most memorable moment of this was talking to Alex Lawrie Factors’ management and staff members and telling them I started within their company in 1968 as a managing trainee and was delighted to be back after all those years as their managing director.

Another memorable moment in the industry was when I was told at the age of 26 by the MD of Alex Lawrie that he would like me to go to Dublin as jointed MD of their factoring subsidiary.  This was a small company which the team and I turned around in a difficult economic environment.  This company was then acquired by Bank of Ireland and I was asked to stay on by them as MD, a position I was very happy to accept.  This position led to me residing in Dublin up until 1988, getting married to an Irish wife, Elizabeth O’Connor, and having two wonderful Irish children, Mark and Zoe.

One more memorable moment, which had a big influence on my career, was the two weeks I spent on secondment in mid-1980s for the First National Bank of Boston.  There I learned the importance of asset-based lending, including invoice discounting in the SME and large business sector.  I used this knowledge to my advantage when I returned to the UK as managing director for TSB Commercial Finance, as it was the main focus of our business and our success in an unexploited UK market.

Over the years I’ve been privileged to work with industry associations and got to know a number of people from around the world, attending many memorable conferences.  A few come to mind: the Secured Finance Network (SFNet) Convention in San Diego where the remaining members of the Beach Boys (not sure how many!) played at the final dinner.  Also going to places like the Taj Mahal in India while attending the IFG Conference in Delhi, launching CFA Europe in London, which was a very prestigious affair, and the ABFA Conference in Sicily, etc.

I am a great believer in people at all levels within the organization as they are all very important.  While running Lloyds TSB Commercial Finance Ltd. post-2000, I was responsible for organizing the annual Big Picture Show at three hotel locations in which all my employees were invited for a presentation by myself and a big thank you, followed by dinner and a Christmas party.

An external industry memory at the turn of the century: I was a volunteer for the Duke of Edinburgh Award in the UK.  My role was to secure financial contributions from corporate bodies including accountants, businesses, etc.  In this role, I co-hosted a small number of lunches at Buckingham Palace.  It was a very memorable, rewarding and worthwhile experience, not only for me but also for my invited guests.

I also have very fond memories of the IF Group and attending the conference in St Petersburg in 2008 with my wife when, to my surprise I received a Lifetime Achievement Award at the event.