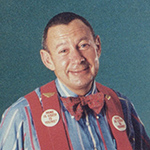 Sonny Monosson received his B.S. in electrical engineering from MIT and his MBA from Harvard Graduate School of Business. From there he went to work for Cosmopolitan Manufacturing Company, a family business manufacturing menswear and raincoats. While working with the company’s factors, he realized he had an aptitude for finance and that factoring could be a lucrative business, and in 1956 left his father’s company to start his own factoring company, Berkeley Finance Corporation. In 1959 Monosson automated Berkeley with an IBM 1440, named Gretchen, making it the first automated commercial finance company.  He had so many requests to consult on how to automate a company that, in 1967, he sold Berkeley and co-founded Boston Computer Group, a specialized consulting company in the computer industry. Clients included the GSA, IRS, Computer Sciences Corporation as well as finance companies.

This led him to see the huge growth potential of the burgeoning computer industry and in 1968, he founded American Computer Group (ACG), Inc., a pioneer in the used computer market. But buying and selling used computers was just one of Monosson’s companies. In 1968 he also incorporated Boston Financial & Equity Corporation (BFEC), a specialty finance company that financed high risk companies, knowing that if he had to repossess the technology equipment, he had the knowhow to remarket it. Boston Financial & Equity continues to operate today, run by his daughter, Deborah.

While running both BFEC and ACG, he created Monosson Technology Enterprises, which provided zero-stage capital investing, and acted as editor and columnist for the technology and financial communities for such publications as Digital News, Dataline and The Secured Lender.

In 1981, he created a newsletter, “Monosson on DEC,” an analysis of Digital Equipment Corporation and its products. The newsletter was widely recognized and not only read by employees and the general computer industry, but also by the CEO of DEC.

Monosson was founding president of the Computer Dealers Association, and inducted into its inaugural Hall of Fame; and also a past director of the Equipment Leasing & Finance Association and inducted in their inaugural Hall of Fame. He was a past director of the Secured Finance Network (formerly, Commercial Finance Association) serving as chair of the Finance, Audit, Public Relations and Small Business Committees as well as on the Executive Committee.

The Monosson Prize for Entrepreneurship Mentoring was established at the MIT Sloan School of Management, to continue Monosson’s mission of providing mentoring to will-be entrepreneurs. Monosson provided 55 years of valuable advice and counsel to classmates, clients, competitors, friends and students on starting and building entrepreneurial enterprises. He created more than ten businesses in the finance, publishing, computer, and leasing industries.

Monosson was also a Master Gardener.