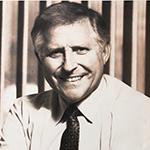 Bob Miller graduated from the Syracuse School of Management in 1952 and began his career in public accounting with S.D. Leidersdorf & Co. In 1959, he joined Congress Financial as an assistant controller and was instrumental in taking the company from a factor to a leading ABL platform.

He rose through the ranks and, in 1986, assumed the role of president, which he held until his death in 1994.

Congress was one of the original ABL finance companies. According to Mark Fagnani, Bob’s nominator for the Hall of Fame: “Congress invented and/or perfected all of the concepts that made our industry possible including the concept of cash dominion, the use of collateral field exams as a due diligence and monitoring tool, monitoring concepts like summary and concentration reports, reconciliations, verifications and trend cards to name just a few.   Congress was also one of the first lenders to ever fund LBOs and MBOs and also one of the first to do participations (now co-lending) in order to be able to handle larger transactions. Bob was instrumental in putting all of that in place. He was also one of the very important figures in the Secured Finance Network (formerly Commercial Finance Association) and served as chairman. Bob knew the key executives at every finance company and later the bank-owned ABL lenders and furthered the organization’s goal of expanding membership and championing industry issues.   Bob had fantastic analytical skills and great instincts and was able to determine what was a good deal and how to structure them.  Under his leadership Congress grew exponentially to ultimately become one of the largest ABL lenders in the country with an unparalleled record of low loan losses and high profits.”

Mark added: “Bob was a great mentor and encouraged every employee to learn, grow and to act independently.   As a result, Congress-trained employees went on to become senior executives in every lender shop in the country, continuing Bob’s legacy.  Under Bob’s leadership, Congress opened offices across the nation and ultimately had more than 10 offices covering every region in the U.S. including an office in Puerto Rico.  Bob was universally admired, trusted and respected by his peers in the industry.”