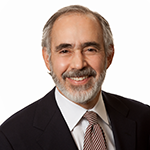 Richard Kohn is a co-founder of Goldberg Kohn and a Principal in its Commercial Finance Group, where he specializes in cross-border and other financing transactions. He has served as Co-General Counsel of the CFA/SFNet since 2001. He has been named by Chambers as a leading lawyer in the United States in Banking & Finance and is a Fellow of the American College of Commercial Finance Lawyers.

Richard has represented CFA/SFNet at the United Nations Commission on International Trade Law (UNCITRAL) for almost 20 years, and has also served as a consultant to the United Nations in connection with UNCITRAL Legislative Guide on Secured Transactions and as a member of the UNCITRAL Expert Group on various projects. He has also participated in initiatives to promote secured credit in other countries, including the People’s Republic of China and Mexico.

Richard is a Lecturer in Law in Cross-Border Lending at The University of Chicago Law School, and writes and speaks frequently on commercial finance topics. He is also a member of the Board of Trustees of the Brain Research Foundation, which funds cutting-edge neuroscience research, and previously served as Chairman of the Board of Chicago Shakespeare Repertory Theater and President of Anshe Emet Synagogue.

Building personal relationships is a key to success in the commercial finance industry, and there is no better way to develop those relationships than by participating actively in SFNet at the national and chapter levels.

I’ll never forget the moment I first represented SFNet at a meeting of the United Nations Commission on International Trade Law in Vienna.  It was thrilling.

SFNet has played a central role in my career development.  I grew up with SFNet, given that my father, LeRoy Kohn, ran a commercial finance company and was a past Chairman of SFNet. I became actively involved in SFNet right out of law school, began representing SFNet at UNCITRAL in 2000, and became Co-General Counsel of SFNet in 2001.  Most importantly, I have formed many of my closest business relationships and friendships through SFNet.