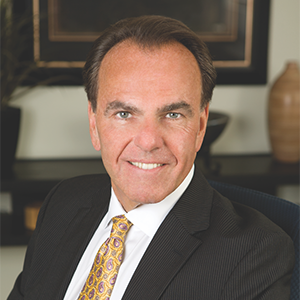 Michael Haddad serves as the president of the Capital Finance Division for Sterling National Bank.  He joined the company from NewStar Business Credit, which was sold by NewStar to Sterling in March 2016. He founded CORE Business Credit in August 2007 and served as its chairman and chief executive officer and then sold Core to NewStar in November 2010.  Haddad has more than 35 years of leadership experience in the financial services and banking industry. He has successfully built market share and enhanced profitability at top-tier companies in both independent and regulated environments nationally and internationally on numerous occasions. Previously, Haddad had co-founded Marquette Business Credit in early 2004 where he served as executive vice president. Prior to Marquette, he was president and chief executive officer of Guaranty Business Credit Corporation and its predecessor company, Fidelity Funding Financial Group.

Haddad received his B.A. in political science and accounting, and his M.B.A. from St. John’s University in Accounting. He has also served on numerous Boards including SFNet as its past chairman and president.

What advice would you offer to someone just starting out in the industry?
Get a mentor and stay close. Soak up everything you can. I was lucky in having two mentors during my early years at Chemical Bank. I will never forget one of the most valuable pieces of advice I ever received from one of them: “act like the village idiot and you will be surprised by what you learn”. Hard advice to follow sometimes, but sage indeed. Also, join a local SFNet chapter and get involved when just starting out. It offers otherwise unavailable networking and the span of knowledge you can access is crucial.

What are some of the most memorable moments of your career?
One I fondly remember (because it was scary and exhilarating at the same time) is walking away from our line bank’s office after having just received the first $25MM of a $300MM equity investment to start Core Business Credit. Day one it was me and executive office and $25MM. I thought “now what?” The other few involved the numerous M&A deals which I have been lucky enough to have had a role in.

What role did SFNet play in your career development?
SFNet has played a very important role throughout my career. In the early years the committees, conferences and meetings provided tremendous access for me to industry players and titans. SFNet also gave me “credibility” in those formative years. It also provided training. The most important role SFNet played in my career was providing me the industry data so I could convince PEGs and my line banks that ABL was a great spot to play in, had a low level of losses and would provide reasonable returns. Because of this credibility, I was able to raise billions to start and fund several companies. I can’t say enough how important this data is, especially in the “remote” world we are living in now.

How did you get your start in the industry?
I got started in the ABL world entirely by accident. For some this will sound like a weird story, but it’s true. I finished my BA at St. John’s and went to a recruiter to see what jobs were out there. In those days you paid the recruiter in some cases, so I went home and asked my parents for a $500 loan. After squaring up with the recruiter, he sends me to a company and describes what they do as “something” like a credit card. What do I know? The company was in New York and I met with their EVP who, during the interview, asked me if I knew what they did. I said what the recruiter told me. The EVP said, “Well, that’s great; you have no darn idea what we do and luckily for you I was looking for a blank slate.” So, I joined a factor called United Merchants & Manufacturers in their credit bullpen. That “accident” led me to 11 years with Chemical and a ton of M&A and a career in ABL.