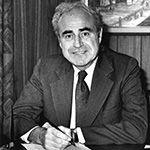 LeRoy Kohn was born in Chicago in 1918, he graduated from Northwestern University in 1939 with a B.S. in business administration and attended University of Arizona Law School.  He served in the U.S. Army Air Corps in WWII as a Second Lieutenant.  After the War, he joined Mercantile Financial Corporation, the oldest independent finance company in Chicago (founded by his father, Hyman Kohn, in 1917), eventually becoming its Chairman and CEO and taking the company public on the American Stock Exchange.  Among the more unusual transactions he worked on at Mercantile were loans to finance the production of “The Graduate,” “The Lion in Winter,” “Cabaret” and “The Producers.”  His involvement with films began much earlier when, as a student at the University of Arizona, he appeared on horseback as a member of the posse in the film “Arizona” starring Glenn Ford.

Kohn first became a member of the SFNet (formerly Commercial Finance Association) Executive Committee in 1958 and served as its President in 1973-74 and its Chairman in 1975-76.  He truly loved SFNet, especially for all the close friendships he developed, and derived great pleasure from watching the association grow and evolve over the years, even long after he retired.

Kohn retired from Mercantile in 1979 and moved to Pebble Beach, CA, but remained active as a business consultant.  He was also active in various local charities and other organizations, including Shelter Outreach Plus, the Food Bank of Monterey County, SCORE, California Coastal Rural Development Corporation and Sons in Retirement.  An avid golfer throughout his life, he once played in the Bing Crosby Pro-Am, delighting the gallery when he sank his trap shot on the 18th green at Pebble Beach.