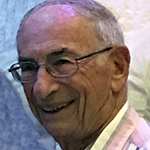 Len Machlis joined the Commercial Finance Association (now Secured Finance Network) in 1955, after serving in the U.S. Army. He was the Executive Director for 38 years, retiring in 2002. He and his wife, Harriet, raised three sons: Steve, Roger and Brian and had six grandchildren, Carly, Elana, Daniel, Marisa, Stephanie and Ally. After retiring, Len and Harriet moved from New Jersey to New York City and enjoyed all of the cultural events NYC has to offer, especially the theater.

If one person can make a difference, Len made that difference. Under his leadership and vision the CFA/SFNet grew from a small regional finance association into an international trade association representing the full gamut of financial institutions. He lived and breathed CFA/SFNet during his career and traveled the country unceasingly in furtherance of the association’s goals. Along the way, he touched the lives of so many of our members and staff. Len was one of a kind and is greatly missed.

Past Chairman Steve Bakke recalled Len’s very first address as the association’s full-time leader. “His new official title at that time was ‘Secretary.’ I’m fortunate to have one of the few remaining original transcribed proceedings of that Twentieth Anniversary Convention at The Waldorf-Astoria in October of 1964.

“For most of us, Len was the face of CFA for many years. In 1964, he was the new leader of what was then ‘NCFA’ and was introduced to the Convention by Chairman Eugene B. Hanson of Northern Finance Corp. Chairman Hanson described Len as NCFA’s new ‘rookie quarterback.’ Len’s address was a wonderfully upbeat look to the future. He spoke of expanding into Europe, developing education programs, fraud prevention, the expanding ‘Information Bulletin’ and plans for expanding NCFA’s publications.

“And it’s easy to feel Len’s enthusiasm when describing the values of the annual convention, which he imagined as ‘an association on parade.’ His focus on the future of NCFA came through loud and clear in his concluding words, which was a quote from Thomas Huxley:

“The rung of a ladder was never meant to rest upon, but only to hold a man’s foot long enough to enable him to put the other foot somewhat higher.”

His leadership made  SFNet what it is today. We were all honored to know and work with him. The industry is better because he was a part of it.”