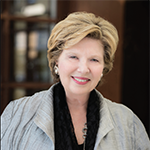 Gail K. Bernstein was executive vice president, national investment manager for PNC Business Credit, located in Los Angeles, CA. Prior to September 2013, she was the marketing manager of PNC Business Credit-Western Region, a de novo office that she opened in 1998.

Before joining PNC, Bernstein was the national sales and marketing manager for Wells Fargo’s ABL unit. She also held the post of senior credit officer and national marketing director for Signal Capital Corporation’s (formerly First City Financial) asset-based unit as well as managing director of Bank of America’s Latin American Private Banking Division, where she managed 80 employees and $4 billion in AUMs. Besides her extensive experience in ABL, her career encompasses a specialization in international lending and investment management. She has traveled extensively in Latin America and is bilingual in English and Spanish.

Join a local chapter of SFNet, get on a committee and attend the events - that’s how you meet other people. Most chapters have YoPro groups made up of young professionals from many disciplines, so you meet others beyond the ABL world and you can pass business back and forth to one another. Be flexible to move forward in your career and take risks with relocation and other jobs within the organization for career advancement. If you’re told that you are not ready or don’t have enough experience, ask what courses you can take or what other experiences could help you improve to get to that position of readiness.  Get to know as many senior people as you can within your organization; don’t be afraid to ask them to lunch.

I’m proud of the fact that I was the first woman to travel for a West Coast bank to Latin America; previously one woman had traveled there from the East Coast.  I have been honored by a charity for my humanitarian work. And last year, I was named one of the most influential persons in Los Angeles by the Los Angeles Business Journal.  Travelling South America for work allowed me to add on time to see spectacular sites such as Machu Picchu and Iguazu Falls.  I appreciate the ability to have worked with the local and national boards of SFNet; I met great people.

I think organizations like SFNet (formerly Commercial Finance Association) help you to develop leadership skills. When you are asked for your opinion, or to be on a committee, I think you should volunteer your time and energy. I was involved in the local California chapter. On the national level, I was the chair of SFNet Education Committee last year and again this year and co-chair prior to that, primarily focused on the educational content and in bringing in more online programs. I’ve been on the Executive Committee of the National Board, and President of the local California chapter for two years, chairwoman for two years, and remain on the local chapter Board now and co-chair the women’s committee. I was a speaker at SFNet YoPro Leadership Summit in 2018, and spoke again at this year’s Summit, held on August 28-29 in Chicago. I’ve been an instructor for a SFNet class in Spanish in Colombia as they were hired by the World Bank, and I’m about to take on another project with the World Bank post-retirement, with the goal of establishing asset-based lending in Mexico.

I started my career in international banking and then moved over to asset-based lending. I moved back into the banking world and then into wealth management for two years. I travelled to Latin America when I was 26 and moved to Mexico when I was 28, and became a top performer there as well. I was not involved in asset-based lending before I joined First City Financial (acquired by Signal Capital), but asset-based lending found me, when the startup subsidiary needed someone who could interface with the bank who owned them and had credibility with the credit committee.  I joined them with no ABL experience, but I had the credit experience that they needed. Being open to new areas is always a plus — you’ll learn, and then you’ll have more to offer in the future.