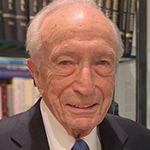 Bruce Schimberg was born in Chicago in 1927. Following service as an officer at Gen. MacArthur’s Headquarters in the Army Occupation Force in Japan, he received a PhB (1949) and a JD (1952) from the University of Chicago.

He was a partner at Sidley Austin in Chicago for many decades, where he started the commercial finance group and was a member of the Sidley Executive and Management Committees.

He was appointed to the Chicago Board of Education to represent all professions in Chicago.

Mr. Schimberg was General Counsel of the SFNet (formerly CFA) for seventeen years, and appeared in the Supreme Court and appellate courts on issues affecting commercial financing.

After retirement from Sidley Austin, he served as an arbitrator and mediator of complex commercial disputes. He is a Fellow of the College of Commercial Arbitrators.

What are some memorable moments of your career?

An early memorable moment as a lawyer arose from the 1960-65 Billy Sol Estes fraud and ensuing litigation in Texas. It involved collateral of warehouse receipts of grain in substantially empty grain elevators, and security interests on non-existent anhydrous ammonia tanks.

Grain silos claimed to contain grain were filled with straw and dirt, covered by a thin layer of grain to deceive inspectors. Bribery was said to have placated federal and state Commissioners of Weights and Measures who supervised the issuance of warehouse receipts.

Some SFNet (formerly CFA) members had been financing various Estes businesses, based on the security of warehouse receipts and numerous anhydrous ammonia tanks.  The highest exposure of a lender in this group was about $5,000,000. It was seen as the largest potential loss in the industry to that date.

Attorneys representing the largest holders of warehouse receipts, chattel mortgages and “guarantees” on tanks requested that I (then in my 30s) be the lead attorney, among separate counsel for each of the lenders.

Estes and his accountants were found to have placed some loan and business proceeds in Swiss bank accounts. His accountant was found dead of gunshot wounds in his back; the Coroner reported that he died “in self-defense”.  I was told that, during the course of the investigation, government agents had wired my hotel room to track the progress of the investigation, since the investigation might implicate some high-ranking officials appointed by the president, Lyndon Johnson. In due course, Estes was sent to prison and some financial recovery was realized from the Swiss bank accounts and sale of his property.