Vernon Francois grew up in a Rastafarian household where the weekly tradition was having his hair braided every Sunday. The experience was so painful that he decided to learn how to braid hair himself, using carpets and window shade edges as practice.

All that practice paid off. When he was just Vernon Francois grew up in a Rastafarian household where the weekly tradition was having his hair braided every Sunday. The experience was so painful that he decided to learn how to braid hair himself, using carpets and window shade edges as practice.

All that practice paid off. When he was just 17 he won “Newcomer of the Year” at the

Black Hair Sensationnel Awards in London. Winning this very prestigious award launched his career. It gained him celebrity clients spanning across America and the UK.

Early on, Francois styled the hair of celebrities such as Keyshia Cole, Kerry Washington and Naomie Harris. He also worked with popular European celebrities, and that is how he met the actress, Lupita Nyong’o, who would go on to win the Academy Award for “12 Years a Slave”. This friendship and eventual partnership helped him cross the pond to the United States. His successful partnership with Nyong’o and move to California created a buzz for Francois and he began to receive calls from other major celebrities such as Solange Knowles and Amandla Stenberg. 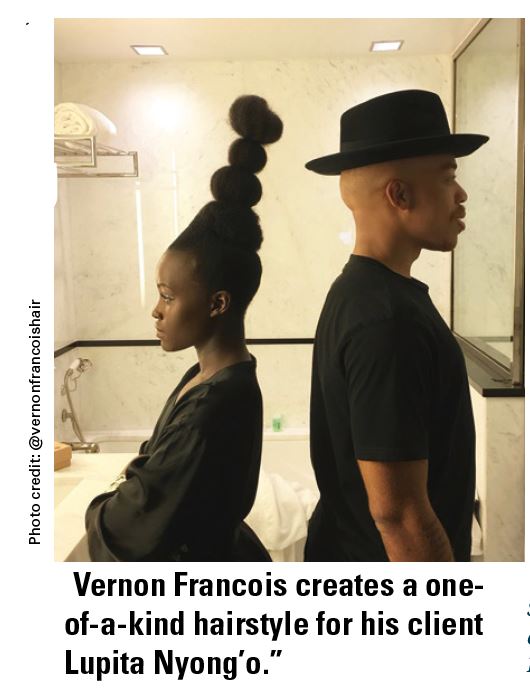 These celebrities recognized his efforts to shift people’s mindsets away from popular beauty standards. Because of his passion for showcasing textured hair and his incredible talent, his celebrity client base rapidly grew. Nyong’o accused Grazia magazine of editing her hair when she appeared on its cover to “fit a more Eurocentric notion of what beautiful hair looks like.” Solange had the same situation occur when she graced the cover of the Evening Standard. Her beautiful braids, styled over seven hours by Francois, were also airbrushed out. Both publications later apologized for theiractions. However, the damage was already done. By airbrushing their hair, they erased the celebrity’s heritage and personal style choices.

Accepting oneself and natural-born textured hair has become a crusade for Francois.

So much so that he has created a video series on his Instagram page (@vernonfrancois). There, he has positive conversations with strangers on why they love their natural-born textured hair. He has made it his mission to change the conversation, teaching young people that they do not need to conform to society’s expectations of what is beautiful.

This has become a game changer, especially in light of recent news stories where students in school have been kicked out due to wearing their hair naturally. The timing of Francois’s message could not be more important.

As a young girl, I had a difficult time accepting my naturally curly hair. At the time, Farrah Fawcett was the ultimate beauty idol/standard, and to have hair that did not conform to look like hers was very difficult. I remember struggling with hair dryers and hoping for a day with no humidity so that the dreaded frizz did not ruin my carefully created hairstyle. I look back and wish that Francois and his products were available for me. If I could have watched his Instagram stories and learned more about positive self image, it would have made a big impact on my self worth. When I received a referral from a banker to his company, I felt immediately connected to him. I wanted to do anything within my power to help his company succeed.

The order for which he was seeking funding was to the beauty retailer, Sally Beauty.

He had recently formed a strong partnership with Sally Beauty stores to carry his hair care product line. When he was a teenager, Sally Beauty was one of the first beauty retailers that he visited. Even then he dreamed of the day that his products would be available across the United States. By partnering with this retailer, his mission was to get his products into even more hands and to spread his message of beauty to all those who have curls, kinks, and coils. Since Prestige Capital funds accounts receivable, we were able to evaluate his purchase order, credit check his customer, and approve them for the amount that he would ultimately ship. He needed a partner who could support his growth as his business scaled.

We were the perfect solution for Francois. And we continue to be for so many other businesses that get large orders and do not know how quickly their companies will grow and how fast their numbers will rise.

As many businesses learn, suppliers want assurances that they will be paid quickly. They are often not willing to wait until the client is paid by the retailer in order to be paid themselves. Therefore, one of the pieces of the financing puzzle that Prestige was able to solve was providing a factor’s assurance letter to his supplier. This letter from Prestige guarantees payment to the supplier as soon as the invoice is purchased and approved. Having this allowed the supplier to feel comfortable shipping this large order knowing that they had a successful 35-year-old finance company behind them guaranteeing payment.

Nick, Francois’s CCO, recently said, “From the very start, Prestige Capital understood my business needs and they were able to quickly assess where they could be of maximum support. At every stage of the process each member of the allocated team was helpful, accommodating, and approachable. Most importantly, as someone who had not worked with a factoring company before, every question was answered clearly and professionally. “

As the orders have shipped and replenishment orders have come in and been fulfilled, I personally feel like I am helping change the conversation on what beauty looks like. It feels good to know we have had a part in helping a company that teaches people everywhere to embrace one’s true self.

Rachel Hersh is the sales director, North America for Prestige Capital. She is an active member of the Secured Finance Network, International Factoring Association and Turnaround Management Association. Rachel was selected as a Woman in Commercial Finance for The Secured Lender and recognized as a Top Woman in Business on Long Island by Long Island Press. Some of her speaking engagements include the Daymond John Academy, LaunchPad Long Island, FoodTech FastTrack, New York New Jersey Minority Supplier Development, and various accounting firms for continuing professional education credits. She holds a bachelor degree in psychology from Brooklyn College.