Syndicated ABL Volume up in 2019, Deal Count Down

On the back of a strong start, 2019 syndicated asset-based loan (ABL) volume is up nearly 5% annually through the middle of December with almost US$90bn of completed issuance (Fig 1). An additional US$4.4bn has closed via clubbed distribution.

With the exception of 2Q19, which observed a modest dip in lending year over year, quarterly issuance has been up 30% compared to the year ago period. Despite this good news and what should otherwise suggest positive momentum in the market, ABL lenders note that a number of market trends have raised concerns. Some of these reflect the impact of normal cyclical market swings. Others raise broader questions around possible permanent changes to syndicated loan market dynamics.

At less than US$15bn, 4Q19 syndicated ABL loan volume to date is less than half that of year-ago levels with only a few weeks left to the quarter. It is also down over US$8bn compared to the prior quarter. Most of this shortfall can be traced to the strength of the high yield bond market – most notably in the context of strong BB and single B credits – in 4Q19 and the relative value play which has favored the high yield bond market at the expense of ABL loans. It is, in fact, the flip side of the market dislocation observed in the first half of the year, which ultimately supported ABL deal flow. 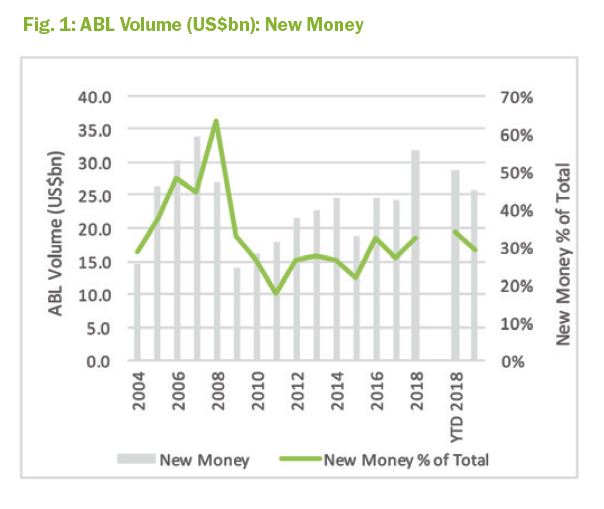 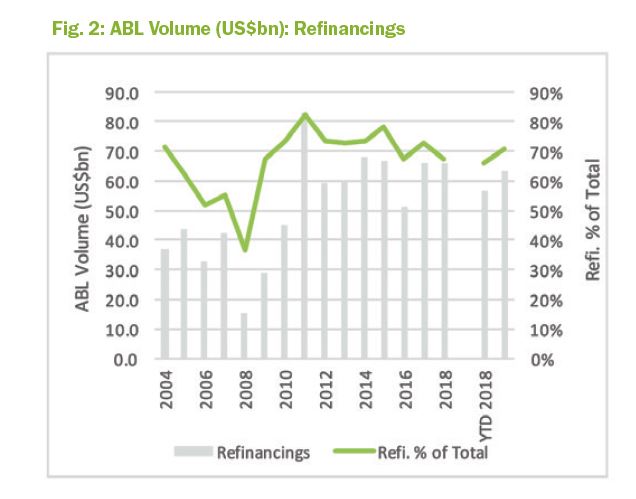 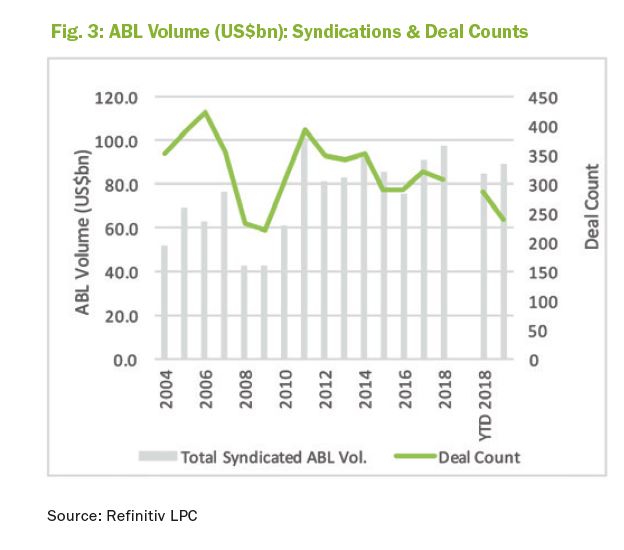 In October, United Rentals, a substantial player in the ABL space, opted to supplement liquidity needs via US$750m in eight-year senior secured notes priced at 3.875%. In Europe, Ball Corp priced US€1.3bn in five-year notes at 0.875%, highlighting the broad pricing benefits of tapping the high yield market at the time.

Apart from market technical, which increasingly skewed in favor of the high-yield bond market, the data suggests that while there has been net growth of dollar volume year over year, ABL deal count was down. As of the middle of December, 238 ABL deals were completed via retail syndication compared to 287 during the same period last year. Lender noted that borrower bank groups continue to be streamlined and hold levels are going up.

Digging into the numbers further, the respectable aggregate volume masks a more worrisome and yet, arguably, increasingly entrenched market trend. Namely, the squeeze being experienced by lower-tier bank lenders either closed out of deals altogether, or facing looser terms and thinner spreads.

Amid easy access to cheap cash, “buyside lenders will be less relevant in the market until the cost of capital goes up and/or is more valued by banks,” said one arranger. At this time, non-event driven, best-effort deals with few timing concerns are being readily clubbed up. So are many smaller acquisition financings. A flurry of US$75-175m ABL revolving credit facilities, which combined with either cash-flow loan structures or high-yield bond issues to support 2019 M&A undertakings by issuers including TruckPro LLC, Kaman Corp, Imperial Dade and Autokiniton US Holdings, were managed by two or three banks.

“In cases where it is not manageable for a corporate to oversee ten banks, you will see one to two banks arrange, bring in banks, and get them through the diligence process,” said one lender.

In practice, it also comes down to the underlying assets that make up the ABL borrowing base.

“It will depend on whether they are non-traditional ABL assets and how much banks are willing to hold,” said another lender. “In those cases, the buyside may be more relevant. But, ultimately, you will continue to see smaller bank groups because lenders are willing to hold more and issuers want fewer banks.”

The market saw this play out in several ways. At over US$63bn, refinanced ABL issuance was up over 12% year over year (Fig. 2). What is perhaps more interesting, however, is that many of these refinancings were not only completed with more aggressive terms, but with upsizings as well. Nearly US$15bn in new ABL assets raised during 2019 came in the form of recycled credits that were upsized. 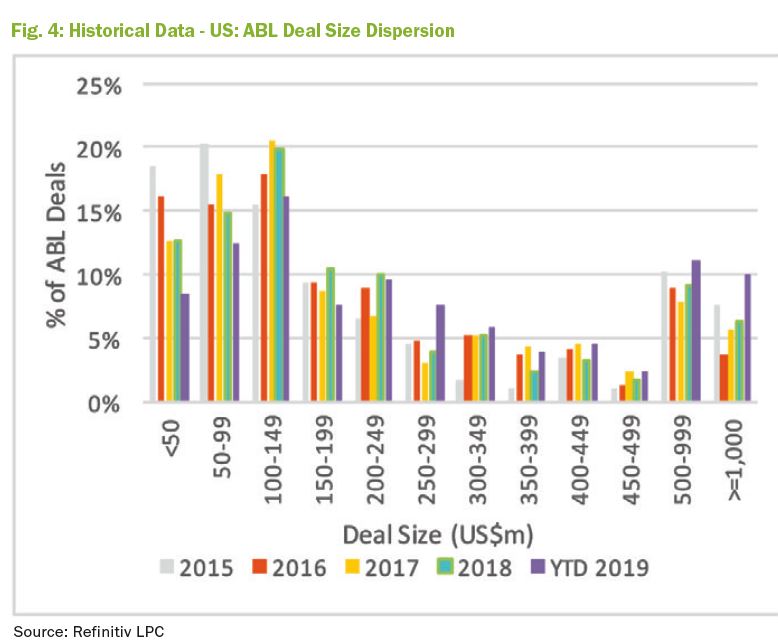 This represented over half of the almost US$26bn in total new money raised through the middle of December (Fig. 3).

With deal counts down, but volume up for the year, it follows that individual credits were – on the whole – larger in 2019. In the first nine months of 2019, 21 deals with at least US$1bn of ABL loan volume were syndicated to retail lenders (Fig. 4).

The average deal size for ABL issues was north of US$375m for the same period, up from US$320m in 2018. More significantly, the portfolio of syndicated ABL assets currently stands at about US$280bn, largely flat from year-ago levels but up from less than US$270bn in 2017 and under US$260bn in 2016. The growth of individual portfolios is arguably even greater when one takes into account the clubbed and bilateral markets.

So how does all this bode for 2020? While the financial markets keep rising, there are some technical drivers hinting at an ongoing softening. In the leveraged loan market, although the spread gap between BB and single-B credits observed in the back half of 2019 has slowed, many say there is a widening bifurcation among single-B credits alone. B-/B3 rated issues specifically are still difficult.

Entering an election year, large capital decisions may be put on hold according to a number of lenders.

“Capital spending has already slowed down a lot,” said one arranger. “But there is an awful lot of buffer built in there – low unemployment, lower corporate debt burden. Activity should hold.”

“I don’t think that uncertainty will help us,” said another lender. “And that will put more of a natural slowdown in ABL.”

Lender capacity, nevertheless, remains intact. “The things that cause deals to struggle are poor credit quality and low or zero usage,” said a source.

To date, the tougher credits that have come to market – Briggs & Stratton recently completed a US$750m financing in what is a border-line pass name – have cleared the market, albeit in many cases, via broader lender groups.

“Everything will be a big club,” an arranger said.

And the signs have not changed in this regard. The ABL financing backing Apollo Management’s $US billion purchase of Tech Data has been filled by joint lead arrangers

“If we look at the consolidation going on in industries traditionally financed by ABL – metals, construction, chemicals – and this favors the larger banks which can hold more,” said an arranger. “There will be more barbelling among lenders in the space.”

What does this all do to spreads? For now, not much. Average drawn spreads on ABL of at least US$75m continue to hover just north of 165bp. And while lenders grumble about awful documentation – “it gets worse, before it gets really bad”– few expect wholescale spread erosion.

The number of deals priced at 125bp over Libor or less is small and has not changed over time.

“There are grids that go down there,” said one source. “But pricing models do not work well down there and the market has reverted to the mean.”

Added another source, “We will bump along where we are. Will we see some deals priced through LIB+100? I doubt it. Maybe on one-offs where yields are made up elsewhere.” 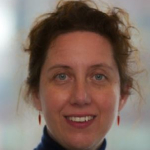 Maria C. Dikeos is a director of Analytics and head of Global Loans Contributions at Refinitiv LPC in New York. Maria runs a team of analysts in the US, Europe and Asia who cover analysis of the regional syndicated loan markets. She has a B.A. from Wellesley College and Masters in International Affairs from Columbia University.