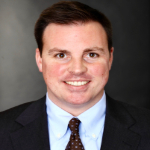 Avi Levine, vice president at Star Funding, Inc. and Andrew (Drew) Loughlin, vice president, People's United Bank, catch up and discuss Drew’s involvement with the SFNet New York Chapter over the years. Drew has been the President of the Chapter for the past two years. Drew can be reached at andrew.loughlin@peoples.com and Avi at alevine@starfunding.net.

Avi: Drew, thank you for taking the time to speak with us today. We were discussing young leaders in the SFNet organization, and your name came up more than once, so we thought it could be cool to get some of your insight on the organization and learn a little about your experiences. Let’s get started. Can you tell us about your progression within SFNet? I am sure you didn’t just wake up one morning as the president of your chapter. Or maybe you did.

Drew: I started as a volunteer for a couple of years (under Carl Giordano, senior vice president of BHI, and president of the New York Chapter), attending and assisting at events. I was then asked to join the New York Chapter board by Brad Kastner (the president who succeeded Carl) as treasurer, which lasted two years, then graduated to VP under Ed Behnen.  Finally, I succeeded Ed and have been President for nearly two years.  I was the last CFA New York President and the first SFNet New York President!

Avi: So that’s about eight years with the SFNet. You worked with some great people. Have those relationships helped your career?

Drew: Yes, these relationships have been very important to me career wise and personally. Through these relationships I have significantly expanded my network base, which has been a tremendous resource when vetting career moves; as well as being a resource for general market knowledge and new business opportunities.

Avi: Why the CFA over other organizations? Sorry, the SFNet. I can’t seem to get that right!

Drew: Ha ha, old habits die slow. I’m working on it, too! Basically, I was drawn by friends in the business and enjoyed the community that is SFNet New York Chapter.

Avi: What do you think about the new name?

Drew: I look at the rebrand as an opportunity for the organization to focus on expanding and growing our network, through a rebrand we can redefine our vision for what we want for the future.

Avi: That’s great insight, I can see why they needed a change. What is the biggest benefit being in the leadership role of an organization like SFNet? Other than the benefits of being a member like networking, events, information, etc.?

Drew: I feel the ability to take something with a strong history and make it better through setting goals and starting initiatives, such as growing the Women’s Council, YoPro involvement, and working on the balance of education and networking events.

Avi: Sounds like you really had the opportunity to grab the reigns and help further develop the New York Chapter.  Where do you see your involvement with SFNet going over the next few years?

Drew: I want to remain involved as much as possible to support future chapter administrations as previous leaders have done for me. I believe I will always be involved in the New York Chapter, in various capacities. I hope to assist SFNet National when the time is right.

Avi: What were the challenges you faced as a younger person in a leadership role with the SFNet?

Drew: The biggest challenge always seems to be time, which makes building out a strong chapter board a priority. The main goal of being a chapter leader is to improve the chapter’s ability to serve its members’ ever-changing needs and keeping pace with other competing associations.  Our challenges each year are around our members - keeping them engaged and growing our network.

Avi: Professionally, outside of the SFNet, I think we are seeing a major shift in leadership to younger professionals. What do you think is causing the shift?

Drew: I assume there is an abundance of qualified young professionals who were able to gain profound experience working through the great recession, as well as the ability to bring new ideas which invigorates their teams and drives success.

Avi: In one word, why should someone be active in an organization like the SFNet?

Drew: Stewardship - the responsible overseeing and protection of something considered worth caring for and preserving.

Avi: Before we go, tell us about the new baby!

Drew: Thanks for asking! Finley Joel Loughlin was born on 6/23/19 and has been a great joy for our young family. We are very thankful that he is a very happy and healthy baby. Now having three boys within four years, we are more stressed but could not be happier!

Avi: Going back to the time thing, I know newborns require taking your time management to a whole new level. Thanks again for your time, we really do appreciate it. 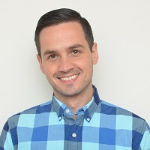 Avi is vice president at Star Funding, Inc. Coming from a product background, Avi looks at financing differently than his peers. With a marketing degree from Bryant University, and experience developing consumer products and consumer brands, Avi takes a real world approach to purchase order financing. He can be reached at alevine@starfunding.net.