The Many Facets of Succession Planning

Succession planning is a cornerstone of any successful and long-lived company. Unfortunately, it is also a concept and phrase that is frequently bandied about, but all too often given only lip service. Sometimes a plan is developed, documented, filed and pulled out years later when prompted by an urgent change—and then found to be out-of-date and insufficient. Good succession planning requires ongoing updates and tackling uncomfortable questions, but the reward for doing so is empowering throughout an organization and builds value.

To start, we took an informal pool of the 30-plus executives present. While virtually all agreed it is a relevant topic, only a surprising minority felt they had sufficiently addressed the topic, if at all. Sure, most of the companies were small, but none denied the importance of the topic.

In my nearly 30 years of lending to, raising capital for, advising and most recently managing a commercial finance business, I have found that succession planning is either flat out ignored or so far down the priority list as to not be addressed except in times of crisis, or otherwise forced upon ownership and management. This is typically true regardless of the size of the organization. Some of the largest in the industry don’t effectively deal with succession planning—even the publicly traded companies, which you’d think have the greatest external scrutiny.

Let’s look more closely at reasons to conduct succession planning. It is, of course, a contingency for absenteeism, short and long-term. There are, however, very powerful strategic reasons for having a good succession plan in place.

Succession planning has two principal divisions: management succession and ownership succession. We’ll explore each of these separately, though they are often intricately intertwined.

All too frequently, short-term “succession” or coverage issues are only dealt with as they arise, not thought about or planned for in advance. The individual may be absent for a few weeks or months while recovering from illness, injury, or some other form of incapacitation such as substance abuse recovery or mental illness. An employee may be the father or mother of a newborn and be away from their duties for parental leave. The employee may be in the National Guard or Reserve forces and called up for deployment. In all these cases, though the employee will be returning to work, their duties need to be attended to during the absence. This isn’t to suggest that a detailed document for every position in your organization exists, but good managers will ask themselves “What if?” and have at least a clear idea of who can do what, or if outside assistance will be required to accommodate these short-term, or non-permanent changes. Not having some thoughtful contingency plans can mean critical gaps in work or excessive burden on an unprepared staff.

Somewhat more often considered is long-term or permanent turnover. People leave organizations for a variety of reasons, but in all cases, the result is the same. There are responsibilities that must be handled by another employee or someone outside the organization.

In some cases, the impact of not planning can immobilize a manager from taking necessary and appropriate actions that can have very negative long-term consequences.

For instance, let’s say you have an employee that isn’t performing up to expectations, you’ve coached and counseled, but to no avail and you know deep down that you need to make a change. Subconsciously, you aren’t confident of how to bridge the gap to replace this individual and so you think, “Well, is it really that bad…” or “I’ll give them another chance…” Having a backup plan will give you confidence and make dealing with this change more palatable.

Similarly, you may have an employee who does great work, but exhibits some behavior that is inappropriate and should not be tolerated. If you ignore, look past or excuse that behavior based on “who would do the work”, consciously or subconsciously, you are putting your organization, and probably yourself at risk. The business world is replete with real examples of the foregoing and when this occurs, not only do you fail in dealing with the immediate circumstance, you are sending a message internally and externally that you are not a healthy organization. This causes employees to be less motivated, leave the organization or never join in the first place.

People also leave our organizations for reasons outside our control. They become seriously ill and can no longer work, or they pass away. We often think about this only in the context of an older employee. To be sure, older employees are statistically more likely to have such an occurrence and so planning for this is somewhat more frequent, but still oft ignored or deferred. After all, no one likes to deal with questions relating to mortality, our own or others. It might be considered impolite or ungracious. In fact, it is neither of those, it is the opposite. It is the “elephant in the room” and will, at times, be a burden to the very person facing sickness or disability. Or maybe they’d just like to retire, but don’t feel they are able. By planning for these eventualities, the organization is better off, and the individual may well be unburdened.

Sometimes as managers we have significant time to accommodate change. For instance, a beloved CFO has informed us that they’ll be retiring in six months and will carry over part time to assist in the transition. But this isn’t always the case and often we can be left scrambling, distracted and distraught. This can result in hurried and rash decisions that are detrimental to our shareholders and our own mental wellbeing.

What is very rarely thought about proactively is what would happen if that key, high-performing 40-year-old is struck down or incapacitated. It will be a devastating emotional shock no matter what planning may have been done. However, companies have been thrown into a tailspin and can take years to recover, if at all, for lack of considering the succession to key positions.

Similarly, people leave our organizations because a competitor offers them better pay, or a promotion. Maybe they simply have decided they’d like to try a different industry or career. It may be that family considerations require them to have more flexible hours or live in a different part of the country. 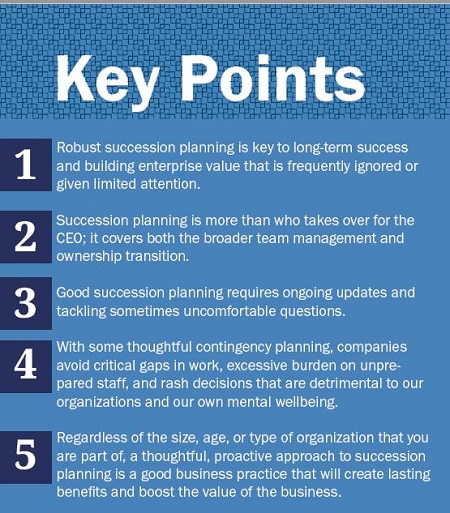 I’ve discussed many of the sometimes more uncomfortable tactical reasons for engaging in succession planning. Let’s turn our attention now to some of the strategic business reasons for this important, ongoing task. Succession planning is much more than just mapping out who will run things when you or someone else is gone; it goes to the very heart of a good human resources strategy. This will empower your executive team, operating management, and functional staff to greater accomplishments and greater value for the shareholders through continuity.

When your executive team, management team and employee base understand that there are well-considered plans for the future health of the business, it assures them their career and financial future have a road map as well. They will want to be part of this process and demonstrate how they can rise in the organization as part of a planned evolution.

A good succession plan also provides confidence to stakeholders outside of management and outside of the organization. It gives guidance to shareholders about who will look after their investment and ensure ongoing returns through inevitable change. A good succession plan will provide assurance to lenders that their money will be repaid irrespective of changes in executives and key staff. A good succession plan signals to potential investors or purchasers of the business that there is a rock-solid foundation, backed up by disciplined processes that will result in increased future value of the enterprise.

Ownership succession is—on the surface—the least complicated. We’ll leave out personal and family dynamics for the purposes of this article. Management succession planning, or lack thereof, strongly influences ownership transition. The assessment and planning for the management and daily operations can direct a board of directors and shareholders about their options going forward. Ownership transition has a few straightforward options: a) pass the business to the next generation through inheritance, b) sell/merge the business or c) wind the business down and distribute the proceeds. If selling the business is the chosen path, there are several paths that can be taken: a) sell to a financial buyer, b) sell to a strategic buyer, c) sell to management. Succession planning influences the viability of each of these options.

There is also the mirror image. Just as the caliber of management succession planning influences ownership’s options for succession, if ownership would like to have certain options, then they should  and insist in a good robust management transition plan to facilitate that option.

Addressing succession planning requires assessing the current responsibilities and skill set of your team and comparing these to the needs of the organization. The executive team, operating management, other key staff positions are all important to consider for this exercise. When replacing positions, should we hire from the outside? Develop internally? Maybe the need is so great that we acquire, merge or sell to infuse the human capital needed.

Succession planning is something that every business organization should engage in and have a process for periodic updating. At a minimum, a succession plan and its components should be reviewed, and updated if appropriate, at least annually and whenever there are changes in the team, ownership, organization composition, strategy or similar events. This will ensure business continuity, motivate the staff, minimize disruption when change occurs and maximize shareholder value.

For small organizations you may wish to engage a consultant to assist you in the process, or you may simply choose to take a few hours one day to think through and commit to writing your thoughts on the topics outlined. In a larger organization, your human resources department can be tasked with coordinating this process. But bear in mind, succession planning isn’t just a human resources function or responsibility, though often it’s administered by a Human Resources department; it is a core leadership tactic that ensures organizational health, continuity, and builds shareholder value.

So, no matter the size of the business, its age or other factors, a thoughtful, proactive approach to succession planning in its broadest form will create lasting benefits and boost the value of the business. 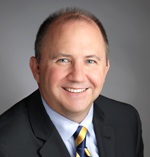 Terry Keating is the president & CEO of Accord Financial, Inc. the US ABL/factoring subsidiary of Accord Financial Corp. and is based in Greenville, South Carolina. Terry’s career has spanned nearly 40 years in varying roles of leadership and building organizations. If you’d like a summary outline of the above article you can write him at tkeating@accordfinancial.com.