Gender Bias and the Pervasive Interruption of Women

mmediately, articles entitled “Google Executive Guilty of ‘Manterruption,’” “Google To Stop “Manterrupting” With Unconscious Bias Training,” and “Google Chairman Manterrupts Female Tech Leader at SXSW to Mansplain Need for Diversity in Tech” took over the media coverage of this awkward but illustrative moment.4  One of the articles even suggested that Schmidt had “bropropriated” Smith’s ideas when Smith talked about how she would float ideas in meetings that would not be acknowledged but, when a man repeated the same ideas at a later point, his ideas would be heard as if she had not said the same thing earlier.5

When social behaviors like this are observed, studied and discussed for a lengthy period of time without the behaviors changing or even being acknowledged as needing to change, the people impacted by the behavior respond in creative ways (like inventing new words) that grab our attention and make us listen.

Women have been talking for decades about the realities of consistently being interrupted by men when they speak in the workplace; however, the focus on men interrupting women at work has recently intensified to a point where new vocabulary has emerged to better describe the nuances of women’s interrupted realities.  This new vocabulary is deliberately sarcastic, not to disrespect or demean, but to highlight the frustration that the interruptive behavior continues to engender.  What does this new vocabulary tell us about what women are experiencing in the workplace and how these experiences shape the careers of these women?

In 2008, Rebecca Solnit wrote an essay entitled “Men Explain Things to Me” where she defined “mansplaining” as a man interrupting a woman to explain to her something that she actually knows more about than he does.  She recounts an experience where a man once interrupted her to tell her about a very important book that had come out in her field only to realize that he was telling Rebecca about…Rebecca’s book.6  In 2015, Time published an article explaining the terms “manterrupting” (unnecessary interruption of a woman by a man) and “bropropriating” (a man taking a woman’s idea and taking credit for it) with Kanye West’s “manterruption” of Taylor Swift’s acceptance at the 2009 VMA Awards as a prime illustration of the term.7  We can now add Schmidt’s and Isaacson’s interruptions of Megan Smith to the list of illustrations that help us understand and use this new vocabulary.

Snyder found that men interrupted at twice the rate that women did, and men are three times more likely to interrupt women as they are to interrupt another man.  When women do interrupt, they interrupt other women 87% of the time.

Snyder’s informal study inspired me to do a similar study of observing interruptions in meetings of senior leaders (where I was not an active participant as a speaker or advisor) to see if my findings would illustrate the same patterns as Synder’s.  I also interviewed several of the men and women after the meetings to see if they were aware of their interruption behaviors and/or how they had been affected by being interrupted.

I observed/listened to 15 live meetings, 11 conference calls, and 3 panel discussions at conferences between July 2014 and January 2015 for a total of approximately 41 hours (2460 minutes) of conversations.  All of the meetings, calls and plenaries included people in leadership organizations within their organizations – vice presidents or above in corporate entities and partners/managing directors or above in professional service firms.  Each conversation had at least five people with at least two of the people being women.  The number of women generally ranged from 20% to 45% of the group being observed/heard; women were not the numerical majority in any of the groups.  I was not an active participant in any of the meetings, but I was an invited guest, given an ongoing advisory role with the organizations involved.  Neither the organizations nor the individuals in the room were aware that I was observing the number of interruptions.  I informed them of my observations at the end of the conversation.

In addition to observing/listening to these conversations, I interviewed 14 women and 13 men who had participated in the observed conversations. 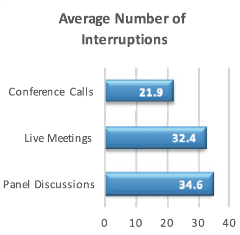 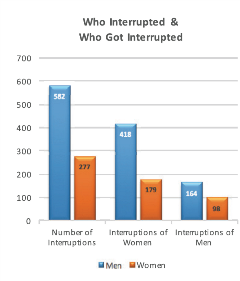 The general findings of this informal study were consistent with Snyder’s findings and added a few additional nuances that provide insights as to which contexts can lead to more interruptions of women and how women internalize these interruptions, especially the intrusive interruptions.

On panel discussions, women were likely to be interrupted by men regardless of whether they were specifically asked a question by the moderator/audience member or they were adding their commentary to a point made by someone else.  Almost all of the interruptions of women by men on plenaries were intrusive interruptions.  Women mostly responded to these interruptions by ceding the floor to the interrupter, but when men interrupted other men, there was usually a series of interruptions as each man sought to be heard.  Finally, in addition to the high levels of “manterrupting,” panel discussions were the contexts in which there was also the highest level of “mansplaining” and “bropropriating.”  The plenaries were very similar to the Schmidt, Isaacson, and Smith panel at the South by Southwest festival.

In live meetings, there was a lot of variance in interruptions based on the topic of the meeting, the seniority levels of the men and women in the room, the gender of the meeting leader, the length of the meetings and the number of people who joined the meeting remotely via videoconference or teleconference.  While the men interrupted twice as much as women and were significantly more likely to interrupt women than men (about 75% to 25%), there was also a difference in the types of interruptions made by men and women in live meetings.  The majority of interruptions by men were to state a disagreement/agreement, accelerate a conversation or add personal perspectives; the majority of the interruptions by women involved asking questions, asking for points to be repeated or chiming in with logistical details about where people were, clarifying deadlines, etc.

On conference calls, the overall number of interruptions decreased, and men were not that much more likely to interrupt women (60%) as they were to interrupt other men (40%).  The lack of visual cues that trigger interruption behaviors seemed to have impacted how interruptions worked.

In the individual interviews with several of the men and women who had participated in these meetings/calls/plenaries, most of the men reported not being aware of either interrupting anyone or having been interrupted.  Although a couple of the men did remember being interrupted (both by other men), and they recalled a quick conscious decision-making moment when they chose to respond to the interruptions by getting back into the conversations, most of the men’s interruptions of others and/or responses to being interrupted were not conscious or deliberate for them.

• “…disrespected…I have more knowledge, experience and time put into this, and I still get interrupted like I’m an intern guessing at an answer…what really upsets me is that no one else says anything…”

• “…invisible…I just said the thing that the guy next to me is now saying, and people are nodding at him like he came up with some bright idea instead of repeating what I just said…”

• “…frustrated…I worry so much before I interrupt anyone, and when I do, it’s because I really needed to…someone was just on a bad path with where they were going…just wrong, you know…so I have to interrupt to get the meeting on track again…”

Interestingly, most of the women who were interrupted on conference calls did not report these same feelings of disrespect, frustration or invisibility.  They attributed the interruptions more to the difficulties in having effective group conversations via conference call than on their gender per se.

We cannot talk about women’s retention, advancement and leadership in workplaces without exploring what happens when women are consistently interrupted in the workplace.  If women cannot even be heard, can they truly advance into leadership?

We also have to fully explore what the impact of being interrupted is on women.  Many of the women in this study shared how difficult it was for them to continue feeling engaged in their workplaces when they were being interrupted so often by men who were seniors, peers and even juniors to them.  Simply acknowledging the interrupting and the impact of it will start a very necessary conversation in our workplaces.

A study reviewer raised interesting questions about how dynamics would shift in meetings with all women or all men and if there was a tipping point of the number of women in a room where interruptions of women would decrease.

The energetic responses to this research from a diverse group of reviewers and early readers has helped me understand that, while the study answers some questions, we are quite far from fully understanding and/or negotiating this topic.  We need to do more formalized research in this area and we need to keep experimenting to see what works in reducing the interruptions.

We’ve come a long way in better understanding the problem.  That said, we have a long way to go in solving it.  This study is a small step in keeping us moving in the right direction.  TSL

A leading researcher, author and advisor in the fields of leadership and inclusion, Dr. Arin Reeves studied business at DePaul University’s College of Commerce, attended law school at University of Southern California and received her Ph.D. in Sociology from Northwestern University.

Dr. Reeves is a best-selling author of two books – The Next IQ and One Size Never Fits All– and she is the President of the research and advisory firm, Nextions (pronounced “connections” without the “co”), a new way of seeing and doing leadership and inclusion. She has designed and led several comprehensive research projects on leadership and inclusion in topics ranging from gender equity, cultural integration and implicit bias to transformational leadership and working through generational differences.

Before Nextions (formerly The Athens Group), Dr. Reeves practiced law for several years and also served as an Adjunct Professor at Northwestern University where she taught classes on law and society.

Her book, The Next IQ: The Next Generation of Intelligence for 21st Century Leaders, was a publisher best-seller upon its release in January 2012, and her latest book One Size Never Fits All: Business Development Strategies Tailored for Women (And Most Men) was released in August 2014. She has also authored a chapter on creativity, innovation and inclusion entitled “Creating Creativity” for the Global Innovation Science Handbook, the premier resource for innovation practitioners. Dr. Reeves has been featured on NPR for her work on inclusion, is cited often in online and traditional media as an expert in leadership and inclusion in workplaces. She is a Fellow of Leadership Greater Chicago, and she was recognized as a Rising Star by the Anti-Defamation League. Her column “Diversity in Practice” was recognized by the Herman Kogan Media Awards for excellence in journalism. She can be reached at www.nextions.com.