How do you strategically leverage mentoring relationships and sponsorships? How do you make the most out of networking? How do you prepare for a performance review? How do you decide if it’s time for a career change? These topics and more were tackled in SFNet’s First Annual National YoPro Summit, 40 under 40 Committee Panel held at Winston & Strawn LLP in Chicago on November 29th. Panelists, comprised of past and current SFNet 40 Under 40 Winners, shared their advice for success for young professionals.

The panel kicked off by discussing the role of sponsors and mentors in shaping careers, from formal mentors to co-workers who eventually turned into mentors.

“When it comes to mentors, I’ve always tried to work with someone I admired for a certain reason or another, or because they had a talent or a skill that I thought I was lacking,” added Jason Miller, Otterbourg P.C. “It’s like if you’re playing tennis, and you’re more advanced than your opponent, you’re not going to get better. You have to expose yourself to some other methods that are working at your institution. At the end of the day, stay authentic to who you are, and work within the confines of your overall skills but look to leverage those things you learn and use them to develop.”

Susana Siskind of PNC has had four sponsors over the course of her career who have also been managers, one of whom was instrumental in getting her a position in portfolio operations at PNC.

“Within 90 days of me starting at PNC, he had an opening in portfolio management, and, while it ruffled some feathers, I got the job. I was a known entity to them and he was able to push,” Siskind said. “You need someone who is going to push you. We spent a lot of time together and got to know each other and our strengths and weaknesses.  Be specific about what you want for the future, because oftentimes a sponsorship in an organization also has to do with resources.”

Networking
We’ve all heard it a million times—networking is key to success in your career. The panelists explained how they learned to take their own approach when it comes to networking.

For Jason Miller, he approaches networking as relationship building and looks at it from a selfless perspective.

“I’ve never actually ‘networked,’” added Miller. “The way I look at it is, I build relationships. I build friendships and I help and solve problems. Some people approach networking almost as a sport. But for me, it’s about going out and meeting people that I genuinely connect with.”

“A lot of times you’ll hear the word networking and you’ll think of it as advancement opportunity,” said Joe Nappi of Phoenix Management Services.  “My advice is to not be the card taker. Don’t work the room just to get the card to then stick it in your bag and never follow up.”

Siskind, having been at PNC for 16 years, discussed the importance of internal networking. “I try to meet people in PNC’s other offices, whether it’s Pittsburgh or Los Angeles. Taking five minutes to put a name with a face in your own organization is beneficial.”

Nappi asked the room, ‘How many of you have gotten a deal after meeting someone for the first time?’ “It’s all about the connection, build it before you need it, expand your circle.”

Performance Reviews
Whether it’s semi-annual or annual, a form with checkboxes or a formal meeting face to face, there is a wide range of how performance reviews are approached. It’s best to keep track of accomplishments and projects throughout the year for optimal preparation.

“It’s important to get in front of your manager on an as-needed basis,” Nappi said. “Do a de-brief right after a project, don’t wait for feedback. Ask what you’re doing right and what you can be doing more of.  That relationship can also help develop into a mentor later down the road. Not everyone in that seat will be the best person to give you a review. At least if you’re making the effort of checking in, you can bring that habit to the next place you go.”

“It’s one of those things they don’t teach. I’ve had to learn how to give better reviews,” Siskind added, who advised being prepared, and knowing where you’ve been throughout the year, especially if you already have a strong relationship with your manager.

“For self-evaluations, keep a list of the things you’ve done all year long,” Miller said. “Deconstruct it and know in advance what the criteria is, whether it’s criteria from last year’s review or information from someone in HR who can advise what this year’s evaluation will be like. Make it as bulletproof as possible. Reference specific praise and have examples of your contributions.”

“You want to be careful to not overly self-promote,” Miller said. “It is important to recognize other team members who do a good job. More often than not, managers are paying more attention than you realize. When you give credit to a deserving team member, it is remembered. It reflects well on you and on your colleague.”

At the close of the panel, the floor was open for a Q&A. Panelists were asked how they maintain the connecting with people they’ve met at events. Specifically, the question was asked if it’s awkward to connect with someone six months later because you’re in town.

“I don’t think it’s awkward at all, you have to put yourself out there.” Nappi responded.

“There are also strategies that you can do in the background, that will create an environment that won’t be awkward; like connect with these folks on LinkedIn, like their content, comment on it. Support things that they’re doing.” Miller added

Alexander mentioned that it’s important to diversify your connections.

A question that seemed to be asked prior to the panel was presented by Samantha. “How can we break the millennial stigma that is out there?”

Siskind referenced a comment that was made by a previous “Titans” panelist, Gail Bernstein of PNC, “Technology is continuing to change. Use it to your advantage. Let people know that you are available for calls or to answer e-mails even if you are not physically there.”

Miller added, “I don’t worry about the labels that people put on me, but instead worry about doing an amazing job.” 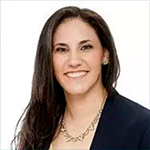 Author: Karen Marino has a vast range of experience in the asset-based lending industry. Currently, she is an Account Executive for North Mill Capital, LLC. She began her career in the finance industry as an entry level collateral analyst while in college and advancing through the different levels of Field Examiner. In her current role as an Account Executive she handles the financial needs of the customers in her portfolio, as well as ensures that the risk of exposure is continuously evaluated and mitigated. She is a graduate of Rutgers University; she is currently a member of the Philadelphia Chapter of the SFNet and involved with different Young Professionals committees. Ms. Marino’s volunteer work includes community outreach, educating children in under privileged areas and volunteering time at a local resource center that provides safe houses, resources, and life skills for people who have been involved or affected by domestic violence.