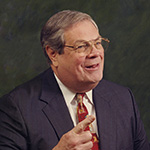 Walter Einhorn was born and raised in Philadelphia, PA. After attending North Catholic High School, Walter graduated with a bachelors in economics and accounting from Villanova University in 1959. After receiving his CPA certification, he started his career as an account executive with James Talcott Inc. and then progressed to senior vice president at Girard Bank and Mellon Bank in the Commercial Finance field. Walter then became CEO of Meridian Commercial Finance Corporation and retired as president and CEO of Sunrock Capital Corp. He also served as chairman of Secured Finance Network (formerly Commercial Finance Association) and chairman of West Deptford Soccer Club.

Walter’s nominator for the Hall of Fame honor, Daniel Stella, said, “Walter was a proponent of SFNet (formerly CFA) as an association, as well as the profession of asset-based lending, while ultimately serving as chairman of the Association. He convinced me to join the Board of the Philadelphia Chapter, where I eventually became president. Walter had a reputation as a task master and a loud confrontational style, but many considered his credit skills and business acumen beyond reproach, and he had a level of compassion that was only revealed to those who knew him well. His support for me during a difficult time will always be appreciated.”