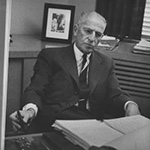 Walter E. Heller was a U.S. financier and philanthropist, who founded Walter E. Heller and Company, Inc., Chicago, IL with money borrowed from his father in 1919. He originally started the company to do “automobile financing” as autos became more popular in the 1920s. The firm developed into a highly successful, multi-faceted international financial company that was a leader in various fields of finance, particularly in factoring. The company also offered leasing, asset-based lending, commercial real estate lending and owned manufacturing companies located throughout the United States and abroad.

Walter E. Heller International was purchased in 1985 by Fuji Bank and was renamed Heller Financial when new leadership was brought in to change the focus after U.S. banks began competing directly with commercial finance companies and business lending institutions. Heller Financial began trading on the Chicago Stock Exchange on May 8, 1998. At that time, it was one of the largest initial public offerings on record. Subsequently, Heller Financial was purchased by GE Capital during the early 2000s.

Mr. Heller was a pioneer of the use of factoring and developed it into a more sophisticated form of finance of company business accounts receivable. The Roosevelt University business school is named after him while Brandeis University’s Heller School for Social Policy is named after his wife, Florence. Several Chicago-area parks bear his name, as well as the Walter E. Heller Foundation, a philanthropic supporter of PBS.