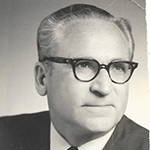 Monroe R. Lazere was born in 1917 to immigrant parents from Odessa, he was the youngest of five children. His father Jacob, who had been an ironworker in Russia, founded a successful construction company in New York City.

After graduating from Dewitt Clinton High School, Monroe attended Cornell University where he studied symbolic logic, a sub-discipline of mathematics which became the basis for computer science. Upon graduation from Cornell in 1938, he headed to Tucson, Arizona, where he taught high school math and also wrote song lyrics with composer Lew Spence, who later became part of the Great American Songbook.

After serving in the Quartermasters Corps during World War II, he attended Columbia Law School. He graduated in 1943 and became an associate at Greenbaum, Wolff and Ernst, known for its literary clients and its freedom of speech and civil liberties cases.

But Monroe grew restless with the practice of law. In 1951, he put together some financing from family and friends and founded Lazere Financial Corporation. Over the years, the business expanded into branches in Miami, Los Angeles and Chicago.

In 1968, Ronald Press published Monroe’s book, Commercial Financing, the first textbook in the field. He used the book as part of the curriculum for a course on commercial finance at Cornell. At the time he wrote the book, he was Chairman of the Board of the Commercial Finance Companies of New York. He later went on to become president and chairman of SFNet (formerly Commercial Finance Association) from 1975-1976.

In the 1970s when the money center banks were scooping up commercial finance firms, Monroe sold his company to Connecticut Bank and Trust, which was then itself subsumed into Bank of New England.

Monroe retired from Lazere Financial at age 75, but continued to be involved with the industry that he loved through expert witness testimony and articles for The Secured Lender. He died in 2011 at age 93. His beloved wife, Muriel, passed away in May of this year. They are survived by two children, Cathy and Eric (Maria), grandsons Brian (Kaitlin) and Keith (Jessica) and great-granddaughter, Anne.