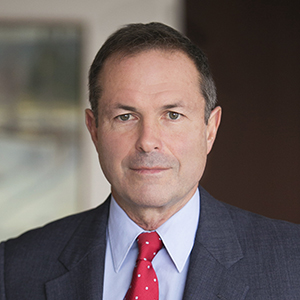 Marshall Stoddard is a senior partner of Morgan Lewis’ transactional finance practice, representing leading banks and other financial institutions in a variety of domestic and cross-border lending transactions and restructurings. A graduate of Western New England University School of Law, he is a well-known and trusted legal advisor in the secured lending industry, recognized annually in Chambers USA and Legal 500 publications.

Stoddard has been active for many years in his participation within, and leadership of, the Secured Finance Network (SFNet), serving as a member of the Executive Board and the Nominating Committee, and chair of the Education Foundation. He co-authored two leading treatises, Lender Liability, and Chapter 11 Practice, has chaired and lectured for numerous legal education programs, co-wrote the California submission for the Compendium of Laws, and edited and provided original text for a large number of legal syllabi used by SFNet for its education programs, including co-authoring the original documentation syllabus. Stoddard also served as general counsel to the Commercial Finance Conference of California for more than a decade.

Notwithstanding his professional success, Stoddard would proudly pronounce that raising his five children, now grown, is truly his greatest personal accomplishment. In his leisure time, he enjoys hiking, spending quality time with his wife and children, participating in many sports, and attending games in his season seats at Lambeau Field.

Take every opportunity to become as educated as possible, utilizing all resources available, and never be afraid to ask questions or seek advice from colleagues and professionals you work with. I also strongly recommend building relationships within the industry through involvement in organizations such as SFNet.

In 2006, I had the esteemed pleasure of interviewing former U.S. Federal Reserve Board Chairman, Dr. Alan Greenspan, on the then-current U.S. and global economy before the attendees of SFNet’s Annual Convention in Washington, DC.  Years later, in 2013, I had the honor and privilege of sitting with former Vice President Dick Cheney as part a Q&A-style keynote address at the annual convention in Phoenix. We openly discussed his tenure under former President George W. Bush as well as his thoughts on the most recent election, the policies of President Barack Obama’s administration and the economic landscape. These are two of the most extraordinary moments of my career, which I have been both humbled and inspired by, and I am honored to have been called upon by SFNet to be their trusted representative for such unique and high-profile exchanges.

Looking back to the earlier part of my career, a defining moment for me was prevailing on a contested bankruptcy reorganization trial in a large case in Seattle, acting in defense of several major lending institutions. It was a significant victory and one that I have been most proud of, to date. Finally, and generally speaking, I have had the pleasure of working with so many wonderful colleagues and clients over the years and, through those relationships and experiences, I have gained much knowledge, perspective, and confidence.

Quite a significant role, indeed, SFNet has afforded me the opportunity to meet and connect with many brilliant people and be inspired by them. It has been one of my primary resources for education and personal development. My involvement has been driven, in part, by the desire to feel part of something larger than my own practice and the satisfaction of, eventually, being able to provide the same benefits to those just starting out that I have received along the way.

In 1978, while working with a small law firm in Hartford, CT, I was hired by Aetna Business Credit (now Bank of America Capital) to be an in-house lawyer for their commercial finance division. I was able to learn both the legal and business sides of our industry and be inspired by so many successful professionals.