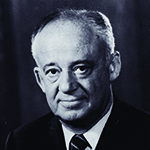 Imre J. Rosenthal was born in New York City on the Lower East Side in 1914. He attended New York University and in 1937 he passed the CPA exam. The following year, in 1938, Imre established Rosenthal & Rosenthal, Inc., now the largest privately held factor and finance company in the United States. His perspective on lending was fairly radical at the time. He chose to focus primarily on financing businesses that, for a variety of reasons, were not able to secure funding from big banks or more traditional lending institutions. Imre was open-minded, creative and always supportive.

He was also extremely philanthropic. In honor of his sister Juliet who passed away when he was young, Imre established the Juliet Foundation, an organization that has supported countless charities and educational initiatives for decades. Imre passed away in 1996, but his business continues to thrive under the leadership of his children, grandchildren and others in the second and third generations of the Rosenthal family.