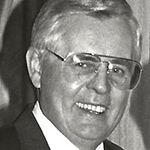 Frank Donahue commenced his career in banking in the accounting department at New York Trust Company.  In 1960 New York Trust was merged into Chemical Bank, where Mr. Donahue rose through Chemical Bank’s commercial finance department.  In 1975, he was recruited to head the Commercial Finance Group at Chase Commercial Corp., a subsidiary of Chase Manhattan bank. In April 1985 Frank Donahue joined the Bank of New York and established a de novo commercial finance company, The Bank of New York Commercial Corp. He was a sole arbitrator for the American Arbitration Association. He also lectured on industry topics and authored several articles relating to ABL. He was a graduate of St. John’s University. Frank served as past chair of SFNet (previously CFA) in 1990. In 1991 he was honored at the National Jewish Health Financial Industries Dinner where he received the Humanitarian Award. He was warmly referred to by his friends as a “monk in a banker’s suit” and the “Bishop of The Bank of New York.”