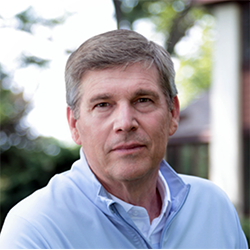 Chairman of the Board, Domino’s Pizza, Inc.

With over 35 years of experience in creatively leading teams and organizations (and 25 years as CEO of three companies, leading two of them to large IPO's on the NYSE), David A. Brandon communicates his leadership philosophy in simple, easy-to-understand terms. He advocates short, memorable phrases which he repeats often to drive home his messages across a broad and diverse organization. His philosophy is based on the fundamental premise of common sense, and his ability to build strong, unified corporate cultures is well-known. Brandon has a proven track record of building strong, highly-motivated and goal-oriented teams and achieving outstanding financial results.

In July, 2015, David Brandon was recruited by former associates at Bain Capital to take on the challenge of becoming the Chairman and CEO of Toys “R” Us, Inc. TRU was the world’s leading dedicated toy and baby products retailer and owned equally by Bain Capital Partners LLC, Kohlberg Kravis Roberts and Vornado Realty Trust. The company was in a very difficult situation. It had large, well-funded competitors; several consecutive years of negative same store sales and market share losses; and considerable restrictions on investment spending based on the over $5 billion of high interest rate debt that had been carried on its balance sheet since 2005. It had become a very troubled investment for the private equity partners after 11 years of attempted turnaround plans and several CEO’s. Brandon accepted the challenge in an effort to save the company and protect as many jobs as possible in the process. He recruited a talented leadership team and began to address problems associated with the competitiveness of the company’s technology; the condition of the fleet of aged stores; required headcount and cost reduction initiatives; necessary improvements in marketing, store operations and supply chain and on-line fulfillment execution; and the overall customer experience. Unfortunately, the combination of intense competitive pressure on selling margins and a lack of investment capital made it exceedingly difficult to make the necessary changes in the business as quickly as they needed to be made. In September, 2017, the company was forced to file for Chapter 11 protection under the U.S. Bankruptcy Code. Brandon and his team created a viable emergence plan based on a debt-for-equity swap that included the closing of a large number of U.S. stores, the renegotiation of out-of-market leases, and a significant reduction in overhead costs. The plan required a level of cash investment and commitment from its’ lenders and/or new equity holders that was initially favorably received. However, trading occurred in the company’s debt that led to a different composition of distressed debt lenders who immediately pushed the U.S. business into a liquidation process. As a result of the U.S. entity being forced into liquidation, various markets around the world were forced to be either liquidated or sold. Brandon’s role as CEO ended in May, 2018. Following, he fulfilled the responsibilities of Chairman of the Board until the company saved as many jobs and markets as possible while also achieving the maximum recovery value possible on behalf of its’ creditors through a combination of sale processes and liquidation activities.

University of Michigan, Director of Athletics

In January, 2010, President Mary Sue Coleman named David Brandon the 11th Director of Athletics in the 150- year history of Athletics at the University of Michigan. During his tenure, Brandon re-built and expanded the Leadership Team by taking advantage of existing talent as well as recruiting talent from outside the organization. Revenues were increased by over 50% and the department broke every fundraising record ever established by the Athletics Department. Brandon was a finalist for “National Athletic Director of the Year in 2011” and Michigan’s rankings in the National Director’s Cup Competition went from 26th in 2010 to being in the top 15 every year, finishing as high as 4th in the nation. Several Michigan Athletics’ facilities were transformed during Brandon’s tenure, including the completion of Michigan Stadium, and the expansion/renovation of the Michigan Golf Team Center, Crisler Arena, Yost Ice Hockey Arena, Michigan Softball Stadium, Michigan Field Hockey Stadium, the Schembechler Hall football facility, and a new operations center. The fundraising and plans for several other projects have since been completed, creating one of the finest college athletics campuses in the country. The “Fan” experience also improved during his time at Michigan Athletics, with Michigan hosting and creating: the largest crowd in the world to attend an Ice hockey game (The 2011 Big Chill); the Sports Business Event of the Year and the largest crowd in North America to attend an NHL game (The 2014 NHL Winter Classic); the largest crowd in North American history to attend a soccer game (2014 match between Real Madrid and Manchester United); and the all-time record for football attendance (114,800), college or NFL, with the first-ever, night home game in Michigan Football history.

In March 1999, Brandon was named Chairman and CEO of Domino’s Pizza by Bain Capital Partners, LLC after they acquired the world’s largest pizza delivery company in December 1998. At that time, the Domino’s acquisition represented the largest single equity investment Bain Capital had ever made. Brandon re-built and expanded the Leadership Team by taking advantage of existing talent as well as recruiting talent from outside the organization. Under Brandon’s leadership, Domino’s achieved significant growth and made significant improvements in product quality and customer service.

In 2004, Brandon led a process that resulted in the largest initial public offering in restaurant history. During his 11-year tenure as CEO, Brandon led the conversion of all domestic stores to one common technology platform named “Pulse,” which enabled the transition to on-line ordering, pizza tracker, mobile ordering, and several other in-store technology benefits. As a result of continuous store growth, international expansion, consistent same store sales growth, and prudent cost management, Bain Capital investors were rewarded with total returns that were several times greater than their investment, and public shareholders purchasing DPZ stock at the IPO price in 2004 have received returns in excess of 2,000% of their investment. Today, Brandon continues as Chairman of the Board of Directors of Domino’s Pizza, which operates approximately 17,000 stores in over 90 markets and boasts system-wide global sales of over $15 billion.

Prior to his tenure at Domino’s, Brandon served for ten years as President and CEO of Valassis, Inc., an international marketing services and sales promotion company based in Livonia, Michigan. Over the course of Brandon’s 20-year career with the company, he was directly involved in building a highly-successful sales and marketing capability; the construction of large, high-capacity printing facilities in Michigan, North Carolina and Kansas; and, managing the fast growth and change accompanying the transition of Valassis from a family-owned printing company to a professionally-managed enterprise. Consolidated Press Holdings (CPH), an Australian- based company, ultimately acquired Valassis for $365 million in 1986 after Mr. Brandon established international expansion and consulting ties. Valassis operated as a division of CPH for five years until Brandon led the process and of taking the company public in 1992. At that time, 51% of the company was sold in a concurrent debt and equity offering that provided CPH a 1,200% return on their equity invested over a five-year period of time. CPH’s remaining shares were sold in a secondary offering in 2007 for approximately $500 million. Subsequent to the IPO, total shareholder returns exceeded 250% under Brandon’s leadership.

In addition to the financial success achieved by the company under Brandon’s leadership, it was three times named one of the 100 Best Companies to Work For in America and continued to be recognized in this way for its’ progressive, successful workplace culture for another seven years in a row following his departure from the company.

The Procter and Gamble Company

In 1974, the Procter and Gamble Company recruited Brandon out of the University of Michigan, following a reference they received from Coach Bo Schembechler, to join the Case Food Products Division. During his time with the company, Brandon worked on projects in several U.S. markets and was also trained as a college recruiting specialist. Before leaving the company in 1979, Brandon served for two years as Unit Manager of the second-largest geographic sales territory in the United States.

Chairman of the Board, Domino’s Pizza, Inc., March 1999 to present: Based in Ann Arbor, Michigan, Domino’s Pizza (NASDAQ: DPZ) is an American restaurant chain and international franchise pizza delivery corporation, operating approximately 15,000 stores in over 85 countries with sales of over $13 billion.

Board Member, Herman Miller, Inc., March 2010 to present: Based in Zeeland, Michigan, Herman Miller (NASDAQ: MLHR) is a major American manufacturer of office furniture, equipment and home furnishings, with global sales of over $2 billion.

Board Member and Compensation Committee Chair, DTE Energy, September 2010 to present: DTE Energy Co. is a Detroit, Michigan-based utility incorporated in 1995 involved in the development and management of energy- related businesses and services nationwide (NYSE: DTE).

Board Member, Lead Director and Compensation Committee Chair, Kaydon Corporation, 2005 – Company Sale in 2013: Kaydon was a leading designer and manufacturer of custom-engineered product, supplying a diverse group of customers in industrial, aerospace, medical and electronic industries. Brandon served until the company was sold to an international buyer.

Board Member, Burger King Corporation, 2003 – Company Sale in 2010: Founded in Miami in 1954, Burger King is one of the world’s largest quick serve restaurant chains, operating in over 70 countries.

Board Member, Northwest Airlines, 2007 – Company Merger in 2008: was a United States airline formed by the merger of North Central Airlines and Southern Airways on July 1, 1979. Northwest merged with Delta in 2008.

Board of Directors, Rock Financial, 1998 – Company Sale in 2001
Chairman of the Board, Valassis Communications, Inc., (13 Years of Service): See previous.

Board of Governors – American Red Cross
Board of Trustees – The Gerald R. Ford Foundation Founder
President – The David A. Brandon Foundation

David Brandon graduated from South Lyon High School, South Lyon, Michigan in 1970. Brandon was a three- sport athlete who was elected captain and earned all-state honors in football, basketball and baseball. After being recruited to play all three sports at various Division I universities, Brandon accepted a full NCAA athletic scholarship to attend the University of Michigan.

Brandon was a 1974 graduate of the University of Michigan at Ann Arbor, earning a Bachelor of Arts in Communications, and was a member of three Big 10 championship football teams coached by the legendary Bo Schembechler.