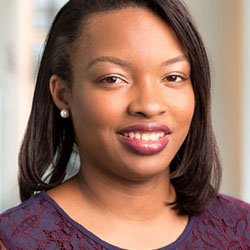 Ayesha Rascoe is a White House reporter for NPR. In her current role, she covers breaking news and policy developments from the White House. Rascoe also travels and reports on many of President Trump's foreign trips, including his 2019 summit with North Korean leader Kim Jong Un in Hanoi, Vietnam, and his 2018 summit with Russian President Vladimir Putin in Helsinki, Finland. As a part of the White House team, she's also a regular on the NPR Politics Podcast.

Prior to joining NPR, Rascoe covered the White House for Reuters, chronicling President Barack Obama's final year in office and the beginning days of the Trump administration. Rascoe began her reporting career at Reuters, covering energy and environmental policy news, such as the 2010 BP oil spill and the U.S. response to the Fukushima nuclear crisis in 2011. She also spent a year covering energy legal issues and court cases.

She graduated from Howard University in 2007 with a B.A. in journalism.