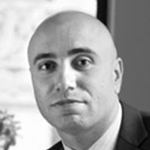 As a recognized leader in the international finance community, Mr. Altaher frequently speaks and moderates panels at leading industry events, including those organized by the Secured Finance Network, Turnaround Management Association, BCR and International Factoring Association. He has been featured in numerous trade publications, including the ABF Journal and The Secured Lender. In 2014, he was recognized as the recipient of the M&A Advisors 40 Under 40 Award, an award given to innovative individuals under the age of 40 who exhibit a strong presence in the commercial finance industry combined with strength of character. He also served on the Executive Committee of the Secured Finance Network.

Mr. Altaher began his career at the Jordan Gulf Bank as an assistant vice president of business development in the International Trade Finance Division. Prior to joining FGI, Mr. Altaher was a senior research analyst at BOE Securities, a research-oriented securities brokerage.

Mr. Altaher was born in Kuwait, spent many years living in Jordan and currently resides in New York City. He possesses a B.S. in Accounting from the University of Jordan, an M.S. in Finance from the Drexel University Lebow College of Business and is also a Certified Public Accountant.