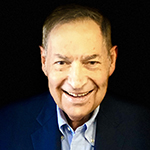 Paul Goldstein was born in the Boston suburbs in 1938 and became a dyed-in-the wool Red Sox, Celtics and Bruins fan (of which he still is today) – while sharing them with the Atlanta teams and the University of Georgia.

Upon graduation from high school, Goldstein attended the University of Georgia, majoring in accounting, which would provide his business acumen. He accepted a job with Arthur Andersen & Co. In 1960 and, from that point until 1978, worked in the accounting field as an accountant, controller, financial officer and CFO.

In 1964, Goldstein had the good fortune to marry Ellen, (who still puts up with him after 54 years). They have two wonderful daughters, Robyn and Amy, who married two great guys and have had four bright and admirable children between them.


How did you get your start in the industry?

It was 1978. I was 40 years old, married with two children, and working for an oil company as a controller, traveling between Atlanta and Texas and earning $35,000. I told my wife if I was ever going to have my own business, that now was probably my last chance and that I felt I needed to take the risk.

I resigned from the oil company and gave a 60-day notice and, while flying back from Texas one night, I sat next to the president of a small factor, who did small deals and gave me the idea to create Presidential Financial Corporation.

I called on 15 banks every day until I had visited everyone in Atlanta… and then did it again… and then again and through those calls I was able to build a referral base that with myself and a secretary built Presidential.

Competition was keen, especially for the new kid on the block, but despite having a stuttering ailment, I was determined to make Presidential a success, and to that end I succeeded.

I hired people and opened my first branch in Charlotte three years later and from there hired more and more competent people which allowed me to open offices in Tampa, Orlando, South Florida, Nashville, Baltimore, New Jersey, Boston and Chicago.

Hiring competent dedicated people and paying them excellent salaries and expecting them to work conscientiously and with diligence, allowed me to build and grow.

Growth most certainly came with problems and while one never forgets his first losses, my training as an accountant encouraged me to build high reserves that fortunately enabled Presidential to grow in a prudent and profitable manner.

I would be more than remiss if I didn’t make a note of a superb hire in 1995 – that being my son-in-law, Steven Gold – who worked every bit as hard as I did and enabled Presidential to grow into one of the largest independently-owned commercial finance companies east of the Mississippi.

Of note is that my 49% partner remained passive from the beginning and in 2002, I sold my 51% interest – without a noncompete – to a corporation controlled by my 49% partner.

In 2003, Steven Gold formed Allied Financial Corporation and I joined the Company as Chairman. From 2003 until the present, I have had the pleasure to work with Steven to assist building Allied into its present position – and look forward to continuing to assist the Company and finance profession in any way possible.