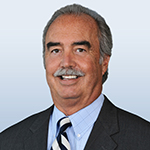 Michael D. Sharkey is the president of Fifth Third Business Capital.  He oversees a nationwide market with regional offices across the United States and Canada. Sharkey has more than 40 years of experience in financial services. Prior to the Fifth Third Bank merger with MB Financial, Sharkey was responsible for the bank’s asset-based lending group, Cole Taylor Business Capital and then MB Business Capital.  For 15 years prior, he ran LaSalle Bank’s nationally-ranked asset-based lending group. As president and CEO of LaSalle Business Credit, he helped build the group into the fifth largest asset-based lending company in the United States. During his tenure at LaSalle, he also served as executive vice president for LaSalle Bank and ABN Amro. Sharkey began his career in financial services with GE Capital as a field examiner and loan officer and moved on to Manufacturers Hanover Commercial Corporation where he served as senior loan officer. From there, he joined and within four years became president of StanChart Business Credit, which was ultimately acquired by LaSalle Bank.

When I first graduated from college with an accounting degree, I went through U.S. Steel’s management training program.  I spent a week a month in Pittsburgh with my peers solving case studies and developing my management skills.  Upon graduation from that program I decided to put my accounting degree to use.  The audit manager at GE Commercial Corp in Chicago, Jim Carlock, gave me a chance to put my degree to work and hired me as a field examiner.  Shortly after that he hired Rick Simons who is currently one of my credit heads.  That was in 1978.   Rick and I have been together off and on ever since.  I am proud of my entire team, many of whom have been with me for two or three decades, some going all the way back to StanChart, some to LaSalle and others to Cole Taylor and MB and now Fifth Third.  The value of ABL has always been recognized by the institutions acquiring our banks and because of that we have survived and provided a vibrant and successful platform for us all to thrive and succeed on.

We hire young people out of college to go through the bank training program and then work in ABL.  We require all of those young people to spend time in operations and field exam.  The time in field exam is critical to gaining a fundamental understanding of how to margin and monitor collateral which is important to underwriting and account management.  Young people should not cut corners.  I also found my MBA in accounting and finance to be of critical importance.

Many of the most memorable moments in my career are tied directly to SFNet, (formerly, Commercial Finance Association).  Those moments include when I was first named a director, when I chaired the annual convention, when I was elected to the Executive Committee, when I was named to Management Committee and finally the chairman of the association.  I made many great friends through SFNet, many of whom will be named to the Hall of Fame.  I am grateful and humbled to be honored along with them.

My involvement helped my career in many ways through education and networking at both the chapter and national level.  I encourage everyone to get involved and to give back to our industry.