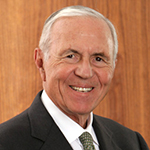 Mr. Nickoll retired in 2007 after serving as President, Chairman, and Chief Executive Officer of The Foothill Group, Inc., a subsidiary of Wells Fargo.  Prior to merging with Wells Fargo, Foothill was an independent company listed on the New York Stock Exchange.   Mr. Nickoll was also Managing General Partner of seven investment partnerships which invest primarily in senior bank debt, both par and distressed issues. Prior to co-founding Foothill, Mr. Nickoll was President (1963-1970) of Civic Western Corporation, a Los Angeles-based commercial finance company, which was later sold to Aetna Life and Casualty in 1969.  He also served as Chairman of the Board and Chief Executive Officer of C.V. American Corporation, a healthcare conglomerate, from 1970-1972.

Mr. Nickoll recently donated $1 million to the California Council on Economic Education (CCEE) — the leading nonprofit provider of economic and financial education for K-12 educators and students in California. The gift is intended to motivate others to support the 60-year old nonprofit, and economic and financial education and Los Angeles County. The donation will also help to sponsor a partnership between the Los Angeles Unified School District and CCEE to engage high school students and their families in structured dialogue on personal finance topics at free workshops.

After graduating from University of Michigan Law School, I started as house counsel with Civic Finance in Milwaukee. I was involved in the process to go public and assisted with underwriting also. I told the top executives there that we needed another office, outside of Wisconsin. I was the only one willing to move to establish the office, so I moved to Los Angeles in 1963 and established a subsidiary called Civic Western Corp. It grew to become bigger than the original company.

When we sold to Aetna in 1969, I became involved in the merger negotiations. I didn’t think Aetna would stay in the finance business, so I moved on and started up Foothill with a couple of other colleagues. We originally did venture capital.

What advice would you give to someone just starting out in the industry?

I would advise young professionals to start their own company, if possible. Of course, you usually need to first start with an established company. In that case, make sure you work with people you like and work your way up.  There are a lot of choices in this industry and you can be creative. Just like anything, it’s what you put into it.  Find a way to compete in a unique way. While at Foothill, we discovered a new way to finance healthcare receivables. We financed medical receivables from convalescent homes.

What were some of the more memorable moments of your career?

In the mid-70s Foothill was able to sell our Rolamite assets (a technology for very low-friction bearings). Rolamite was known for having the third best way of doing everything.

Another memorable event was when we financed MCI. At the time, MCI wanted to buy equipment from a Canadian company. Allen & Co. did the larger underwriting. We said we would only pay them as we got payments, so we held no exposure. It was called ingenius.

Another memorable moment was financing one of Donald Trump’s casinos that had gone bankrupt. It was actually one of the safest deals we did.