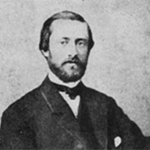 James Talcott, founder of James Talcott, Inc.,  was born in 1835 on a thousand-acre farm in West Hartford, CT. The company started as a selling agent for the Talcott family mill. The commission agency opened in a storefront in downtown Manhattan in 1854. Its function was to serve as a showroom, storehouse, shipping facility and sales office for the mill. The family was not happy with the credit of some of the companies the agency was selling to, so Mr. Talcott agreed that, for an additional fee, he would guarantee the credit of the mill’s customers and to advance funds based on those guaranteed receivables.

Over the years, the credit guarantee function became more and more important at the commission agency and, in 1914, Talcott moved to the American Woolen Building on Fourth Avenue. His principal activity became credit guarantees for the textile industry.

Talcott’s  ability to discern credit worth became legendary. In 1875, James was elected to the board of the Bank of Manhattan Company. An ardent Republican since the birth of the party, James was active in the New York political scene. After voting himself, he would visit the jails one by one, bailing out any Republicans who had challenged at the polls and locked up by corrupt Tammany Hall forces. He was floated as a candidate for mayor in 1890, but declined. Through five market panics and two depressions in the years from 1857 to 1907, James landed in better financial shape than before. Speculation was against his nature and he was fair in his dealings. In the depths of the panic of 1907, he arrived on Wall Street in a silk top hat and frock coat. He carried with him a long list of securities and a pencil. When the market went up, the 72-year-old’s fortunes were greatly increased.

He passed away peacefully on August 21, 1916, surrounded by family and friends at the age of 86.