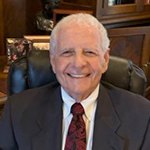 Irwin Teich retired as president and chief executive officer of Fleet Capital, the Commercial Lending Division of FleetBoston Financial (later acquired by Bank of America) in June 2001.  Fleet Capital had offices in every region of the country and provided business financing to the middle market.  Teich held several key positions since joining its predecessor company in 1973.  He was appointed president in 1984 and CEO in 1997 and established a culture that built customer and employee loyalty that became a way of life throughout the company.  Under his leadership and vision, managed assets grew from $294 million to $12 billion and profits grew from $32 million to over $238 million pre-tax at the time of his retirement.

Teich is a graduate of Roosevelt University in Chicago, IL.  He and his wife, Shirl, have been married for 37 years and reside in Naples, Fl.  They have two children, seven grandchildren and two great grandchildren who reside in Atlanta, GA.

After I graduated college, I went into the Army and then moved from Chicago to Los Angeles and a year later married.  My father-in-law, Marvin Grossman, was the manager of a commercial finance office of National Acceptance Co., a subsidiary of Walter E. Heller Co. He was clearly my mentor from the beginning and taught me sales and equipment appraisal.  After a few years I was recruited to a competitor to manage their Western Regional office.  Once again, I was very fortunate to work for John Kerecman and he became my second mentor and he taught me credit and how to manage.

There are four basic skill requirements (not including management and leadership) needed to be successful in our business:  sales, credit, auditing and workouts.  Whatever function you are interested in, you have to continue improving your knowledge and development throughout your career by attending classes at the SFNet and classes outside our industry.  Find someone who will show enough interest in you and has experience you do not have that you can develop a mentoring relationship with.  Read everything you can to expand your knowledge, never stop learning, expect from yourself what you expect from any professional.

There are a number of great memories I can reflect on.  The first that comes to mind is just after I was promoted to president and I had a strategic planning meeting with my senior management people.  During that meeting we agreed that we had to develop a Mission Statement that would carry not only to our employees but to our customers as well.  We decided on a short statement, one that had a lot of meaning to us, which was “We Build Relationships”.  To us that meant relationships with our fellow employees and all our customers.  That changed the culture of our organization from then on.  It is the organizational environment and culture that sustains the will to be successful and loyal to each other.  We printed that phrase on our business cards and on everything that had a flat surface and we all lived it!  There are a number of other great memories but one that also was very memorable to me was when I had been president for about 10 years, we made our first $100 million pre-tax profit.  In our organization we shared a part of our profit with all our employees through the Management Incentive Plan (M.I.P.).  We shared our P&L statement every month with them so they could see the benefit of their efforts by the increase in the M.I.P. pool as profits increased.  That was big for everyone at Christmas when we distributed the M.I.P. pool.

I was fortunate because I became active when I was in my mid-30’s.  I always attended as many of the sessions as I could and I tried to meet and get to know as many of my competitors as possible.  I learned a lot in the sessions and from my competitors.  Through these conferences a trust grew that helped with exchanging information and in syndicating transactions.  It also helped in better understanding our industry, our industry’s role in the market place and in developing our short and long term strategies needed to compete.