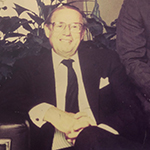 Gerald Blum learned about fraud the hard way: By experience.

After completing his MBA, he joined Jones & Co., an asset-based lender, as an auditor. He left after two years, a pattern set through most of his career because, he said, he kept getting offers from other lenders. He left Jones to join Lexington Financial, also as an auditor. Two years later he went with Jewelers Acceptance Corp. as an account executive and auditor. This was followed by six years, a record stay up to that point, as an account executive at Standard Financial Corp., which had purchased Jewelers Acceptance. In 1961, he went with Meinhard Commercial, at the time a unit of CIT, where he started an asset-based lending operation.

His career really took off in 1970 when he was engaged to start an asset-based lending unit for Fidelity Bank. This venture proved very profitable for the bank. Blum was named president of Fidelcor Business Corp., the bank’s ABL unit, largely because of his ability to adjust the process to the client’s needs.

For example, Fidelcor found a way to finance Larry C. Flynt, publisher of Hustler magazine, who was paralyzed in 1978 by a gunshot wound from a white supremacist. Flynt was not exactly a dream client. Most lenders wouldn’t touch him both because the product was highly offensive and it was tough to finance magazine sales because buyers had the right to return for full credit any unsold magazines.

Nevertheless, Blum saw the prospect of a profitable lending business, and by studying the pattern of returns over a about six years, was able to come up with a formula for advances. “Essentially what we did,” Blum said, “was advance 80 percent on 30 percent of the sales and it worked. However, when the bank got wind of the fact that we were financing a pornographic magazine, the bank’s board held a meeting to review the relationship.”

Members of the board, according to Blum, were old-line Philadelphians whose noses were mostly planted high in the air. They figured it just wasn’t fitting for the bank to be involved with such a trashy magazine. “But when they saw the figures and the amount of money we were making, they decided to overlook the product and agreed to continue the relationship.” Currently, many banks, accountants and lawyers are vying for Larry Flynt’s business.

Blum presided over Fidelcor for 17 years until he retired in 1989.