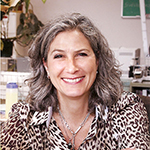 Deborah J. Monosson, president & CEO, joined Boston Financial & Equity Corporation in 1989 as a sales associate. She has held her current position since 2001.  Monosson started her early leadership training as a camp counselor during her college summers teaching swimming, sailing and tennis.  Her first job after graduating was as a portfolio clerk for a mutual fund. She then got licensed as a Commodities future trader for E.F. Hutton. Moving from commodities to stocks, she was an assistant in the Syndicate Department at Dean Witter Reynolds.  She has a B.S. degree in business from Skidmore College and an MBA from Boston University.

She is a Past Chairperson of the SFNet, (formerly Commercial Finance Association) and past Vice Chairwoman of the Equipment Leasing and Finance Foundation. She also served as a board member of the ELFA, the Association for Corporate Growth, Boston and the MIT Enterprise Forum of Cambridge.

My dad was brave enough to hire me. I had been fired from three jobs, I had just finished graduate school and wanted to try my hand at sales. At the time, he happened to have a salesperson leaving. I thought, why not? I knew nothing of the business, but learned to love the sell, the networking, the challenge and the rewards.

I don’t have industry-specific advice.  Challenge yourself, get outside your comfort zone. Believe it or not, I am a naturally shy person. I actually chose sales because it was so opposite of my natural self. It was excruciatingly difficult for me at the onset. Eventually it became second nature to me.  I also worked in primarily male-dominated industries. In the ‘80s I worked in the stock brokerage industry where I really had to hold my own. There was a lot of sexism, and what would now be behavior that would fall in to the Me Too movement. From a family of four girls, I was taught not to put up with that…and I didn’t. You must stand up for what you believe in, as uncomfortable as that may be.

I was schooled the old-fashioned way: You learn as you go. I had previously only been sourcing lease deals, documents were boiler plate, no attorney needed.  One day I was told that now I would be doing ABL/AR deals.  My first deal finally comes in, and it was a nice $1 million deal. Being a small shop, I was told to handle it from beginning to end.  It was approved and so I had the attorney send out documents. Since I didn’t really know what I was doing, I called the attorney with a lot of questions. A lot. The deal finally closed. The attorney’s bill came in… $18,000.  No one told me that he billed for every single call, every single conversation and every question. I did manage to ask him for a discount. But to this day, I make sure everyone here knows that every call and every e-mail, the clock starts, and, if it’s in increments of 10 minutes, or 15 minutes, use that up to ask every question under the sun.

SFNet (formerly Commercial Finance Association) played a tremendous role. I attended both the auditing class and the inventory class. Even though at the time, I was in sales, I found it tremendously helpful to understand the underlying  assets, how they are determined for purposes of lending, what our auditors would look for, what our credit manager would be looking at, etc.  At some point I had Don Clarke come up and give a class to everyone who touched an ABL deal in our company.  From the beginning I was told to attend the mid-year meetings. I didn’t know why as I was a salesperson and no one was there to source deals; they were there to network and really get to know one another. From these mid-year meetings, I was able to call the CEOs of many of the larger firms, call peers, call attorneys and ask for advice, or guidance or bounce ideas off of someone. I made connections there that to this day, still stand.