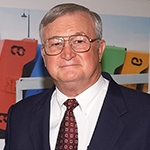 Dave Pendley was born and raised in Oklahoma City just three blocks from Catherine Ann Butler, the love of his life. After graduating from Northwest Classen High School, they were married on June 1, 1963.

Dave began providing commercial business loans in 1965, founding three asset-based loan companies, the First Asset-Based Lending Group, First Capital Corporation and American Business Finance, after working for 16 years for GE Capital. After selling his interest in his second start-up, First Capital, he founded American Business Finance to provide financial services to small commercial companies. Dave served on the Executive Committee of the Commercial Finance Association (now Secured Finance Network) for seven years and was its Chairman in 1993. Dave founded the CFA (now SFNet)/Wharton Institute of Secured Lending and played an important role in the founding of the SFNet Foundation. A few of the many fast-growing companies that Dave provided working capital loans to included: Dell Computers, Express Personnel, Snyder General Corporation, Aaron Rents, Southwest Factories, CMI, Farah Manufacturing, and the Telxon Corporation. A graduate of Washington University in St. Louis, the Stonier Graduate School of Banking and the Venture Capital Institute; he specialized in secured commercial lending, for more than 50 years.

Dave was an Eagle Scout and was designated in 2016 as the Council’s Outstanding Eagle Scout and was the recipient of the Silver Beaver Award. He loved the outdoors and raised his children camping and hiking and took them to Philmont Scout Ranch as soon as they were old enough. Dave was a Master Gardener, spending his spare time in his beautiful gardens. He loved to travel and woke every morning and asked Catherine what adventure she would like to have that day. His legacy will live on in his children and grandchildren as they continue their passions for the wilderness, sporting and adventure.