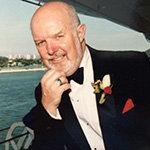 Bron D. Hafner began his lending career with Union Bank in 1961 and moved into asset-based lending in 1963 with Civic Western Corporation and its successor, Aetna Business Credit. He then co-founded and served as president of Financial Guild of America until 1982. He sold his interest in Financial Guild to his partner and started Celtic Capital Corporation in 1982. Celtic Capital has been an active member of the Secured Finance Network (formerly Commercial Finance Association) since 1982.

Hafner was involved with the advocacy group that met with lawmakers in Washington each year back in the 1980s and was involved and attended the initial meetings of what is now the IFFR, in addition to being its chairman as mentioned above.

Hafner always lent a hand to a fellow SFNet member starting their own company, sharing advice, processes and forms of documentation to help other entrepreneurial members get started. He was also an annual contributor to the CFA Education Foundation from its inception until he retired.